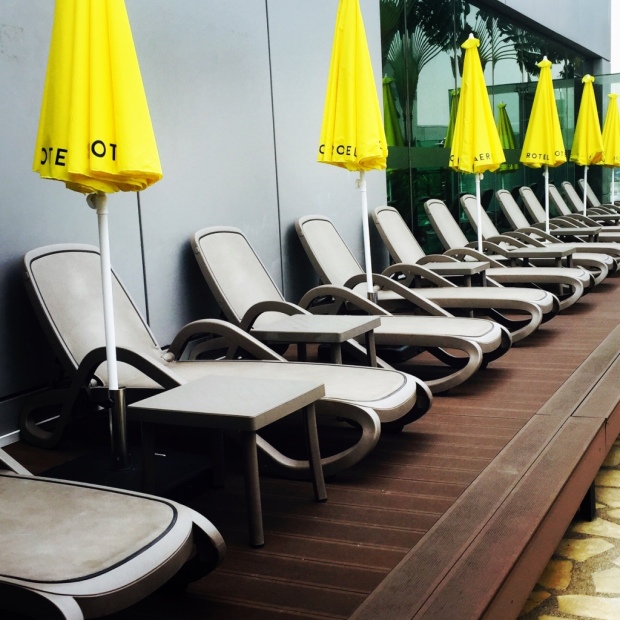 I AM lounging in a pool observing a 747 soar above me, indulging in two of my favourite past times: swimming and plane spotting, in this case, simultaneously. I feel a little like a Bond girl, clad only in a bikini in a secret spot of one of the world’s busiest airports. Stopover: Singapore. Final Destination: Male. And my mission? To relax enroute to my assignment.

It’s a signature Singapore Saturday afternoon, the humidity as high as a Serbian spy, and I have stripped from my trademark all-black travel clothes which I fancy make me look sophisticated, but in truth are only to disguise the fact I spill plane drinks and food all over me when I fly. Changi Airport is buzzing below, but I am ensconced in the peace of the Plaza Premium Group’s Aerotel transit hotel.

Fellow agent S (for sister) and I land in Singapore mid afternoon, slip undetected onto a free train, and scurry effortlessly to Terminal 1. The Aerotel Hotel is perched near Gate D41, and comes replete with clean, comfortable hotel rooms, a library/lounge area, and best of all, the swimming pool – touted as the only absolute airside pool in the world.

Here, in this cool pool, you can order a beer and watch the tails on the tarmac. This funky facility is ideal for travellers such as me who fly often, in economy, (under the guise of being a travel writer) and need some rest or space to work.
While there are a number of packages on offer here, depending if you simply want a room, or a swim, one of the best is the Swim, Eat, Tan, Run, Repeat package where you can plunge into the pool, snatch a shower and enjoy a meal and drink for as little as USD25 for three hours. 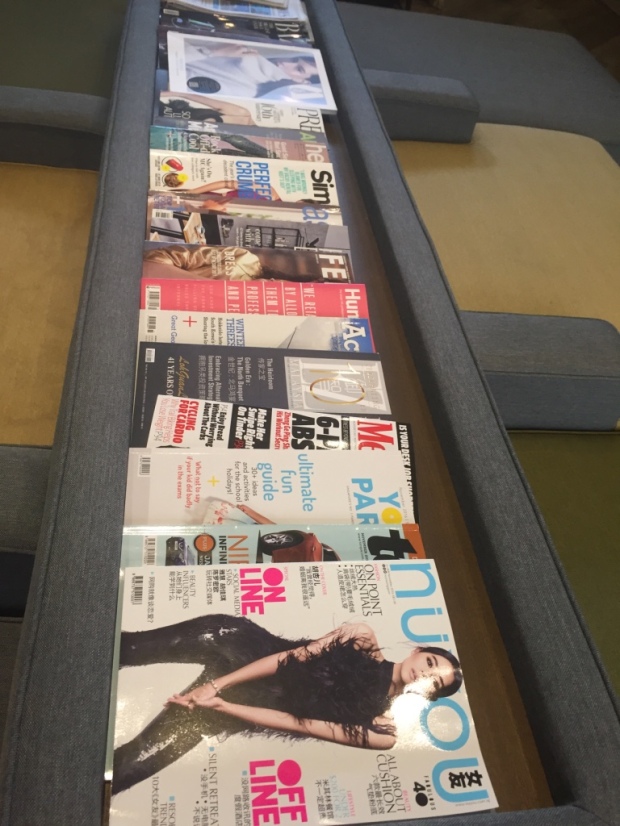 On this journey, I also had access to a room whose comfortable beds rival those in any five-star hotel in which I’ve stayed. My only complaint: there was no hair conditioner in the shower. (Hey, even secret agents have their vanity). And while the bar had a good selection of international and local beers and other alcohol, the food menu could be drastically improved, particularly in a destination such as Singapore which is renowned for its dining. 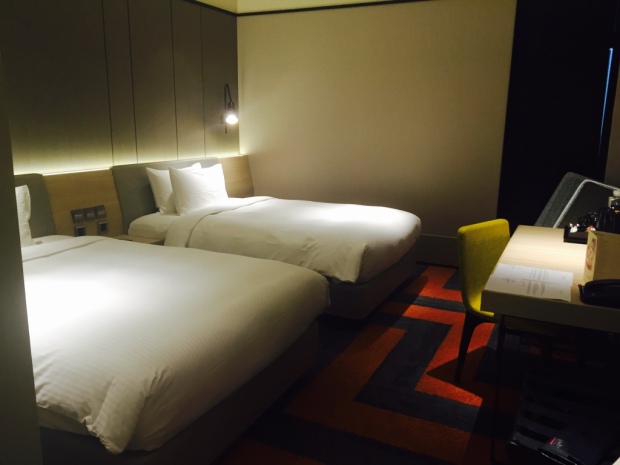 The Aerotel Hotel falls under the umbrella of the Plaza Premium Group – the world’s largest independent airport lounge network which has another transit hotel of the same name in Abu Dhabi and Plaza Premium Lounges in Brisbane, London Heathrow, Hong Kong, Taipei and Kuala Lumpur. Sydney Sky Lounge is also managed by the Plaza Premium Group which was also appointed to manage Cathay Pacific’s First and Business Class Lounges in London Heathrow from December. Anyway who has ever watched a Bond movie knows it all happens around Heathrow, so this is a strategic move in my humble opinion.

On my journey home through Changi Airport from the Maldives, S and I had around three to four hours to kill (or was that people?) and chose Singapore’s Plaza Premium Lounge, also in Terminal 1, at the opposite end to the Aerotel Hotel. (Best to mix it up so we don’t arouse suspicions). The atmosphere in this 7000 square foot lounge is one of pure relaxation and again, you can buy a package which includes drinks, food, shower and lounge seating. All-day dining includes signature Singapore dishes such as laksa and chicken rice, but again I found the food surprisingly bland and uninspiring. The bar, however, was well stocked with good quality house red and white wines, among spirits and beers. 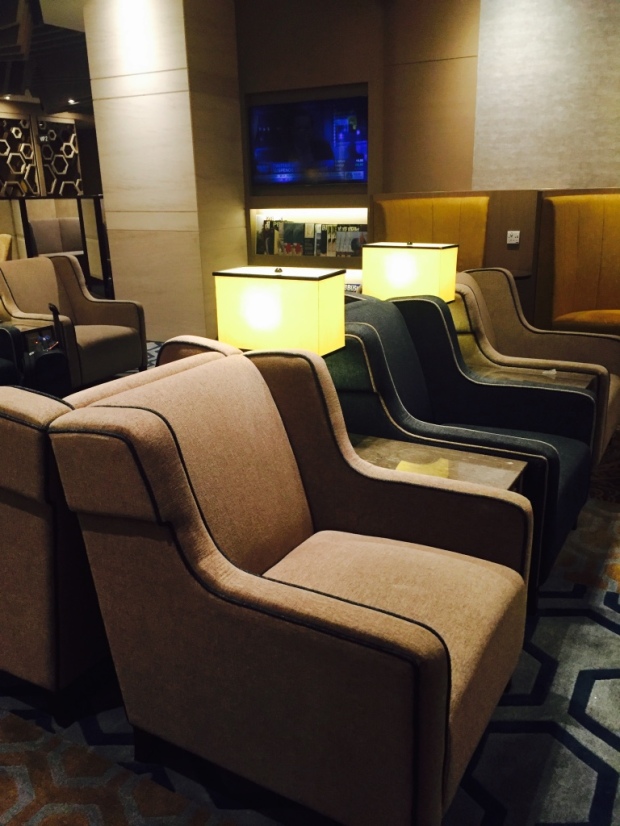 This is a lovely lounge in which to while away a few hours in one of its many nooks and crannies with everything from three private resting suites, six shower rooms, two VIP rooms, massage and nail care services, free Wi-Fi, charging stations, flight information, baggage handling, TV channels, and a selection of newspapers and magazines. 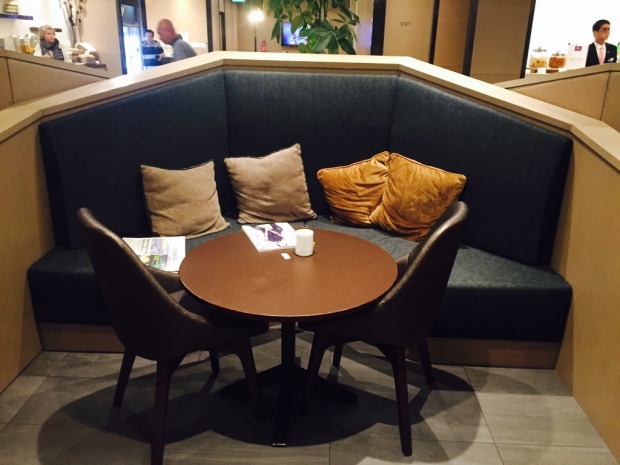 Back in my hometown of Brisbane (or is it, really?), two weeks later I flew out to Indonesia on my final assignment of 2016, and I opted to check out the latest lounge in the Plaza Premium Group, which is a welcome addition to Brisbane International Airport. The Brisbane lounge is the first of the brand in Australia and is located on Level 4 between departure gates 81 and 82. With a seating capacity of 100 over 4500 square feet, it’s furnished with Victorian ash wood and Italian marble flooring in the bar area. A feature wall of 3D tiles are inspired by the components of water, sand and minerals in Australia and soaring windows fill the lounge with natural sunlight and offer views over the terminal and runway.

This state-of-the-art lounge also boasts a Wellness Spa where professionally-trained therapists use Australian spa products from Brisbane-based Jasmin Organics. But for $49 for a 15-minute hand therapy, particularly for travellers like me who are flying to Bali, prices are steep. In the lounge itself, guests also enjoy free Wi-Fi, charging stations, a hot meal buffet, salad bar, freshly-brewed barista-made coffee, and alcohol, soft drinks and juices. Again, I found the food selection a little uninspiring and had to ask several times for a champagne from staff who didn’t quite understand my request. I mean, it was 8am, but a spy needs a drink. There are some criticisms that the entry fee is too expensive for a Brisbane flying public, particularly compared to places like Singapore, but when I was there the lounge was pumping.

Overall, I enjoyed my brief sojourn in Brisbane’s Plaza Premium Lounge, and as I perched on the signature honeycomb seating and contemplated my last trip of 2016, I nearly didn’t leave. But Agent M was calling, and she wanted me on that plane.

The Global Goddess was a guest of the Plaza Premium Group. For more details go to http://www.plazapremiumgroup.com

My Tweets
On the coldest Brisbane May day in 98 years, when the sky was a drab grey, Mother Nature pulled out her paintbrush at sunset. Zero filter. #sunset #brisbanecity #thisisqueensland #viewsofbrisbane #brisbanelife #discoverqueensland #skyporn #cloudporn #toowong #sunsetlovers