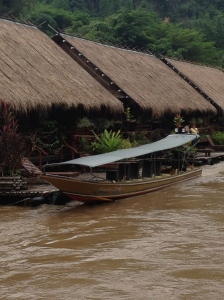 A GORILLAS in the mist afternoon is rolling smugly in over the emerald mountains of Kanchanaburi and I am slung equally low and languid in a hammock, overlooking Thailand’s River Kwai, contemplating life and love. Not my life, nor my love, but that of a man called Sam. Sam Season. 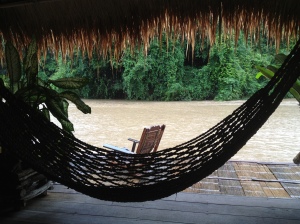 Sam is a Mon man, from the displaced Mon people, considered one of the earliest tribes to live in South East Asia. Not considered Burmese, nor Thai, the Mon exist in a small slither of land along the River Kwai, not far from the Burmese border. The Mon number some 8.14 million people but I am captivated by this one man. This man called Sam. 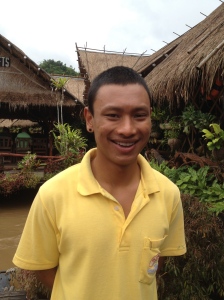 Sam, 22, a tour guide at the River Kwai Jungle Rafts, is a paradox like the story of his people. A heady blend of naivety and worldliness. At night, he paints his face in traditional Mon markings but speaks with an English accent straight out of a south London pub, with a smattering of Aussie twang – picked up solely from the tourists with which he works every day. He moved to this particular village when he was 9, and has been studying to finish High School since, in between working 6 days a week at the River Kwai Jungle Rafts. 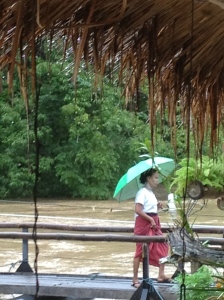 And Sam is in love. But love, like most things along the River Kwai, is complicated. I first met Sam two years ago when I visited the River Kwai Jungle Rafts and he told me of a girl in a neighbouring village, a girl with beautiful long black hair. A girl who made him blush. A girl called Jaytarmon. I told him what I knew of women “tell her she has beautiful hair, women love to be complimented on their hair,” I urged. And then I left, to go back into the “real world”, one of electricity, hot showers and easy internet access, all these things elusive to Sam. That, and the fact he doesn’t own a boat to visit Jaytarmon in the next village, relying on tours to the cave to try and catch a glimpse of her and her luscious locks. I leave, urging him to follow his heart. 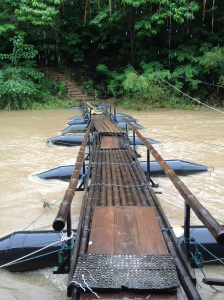 So, when I returned to the River Kwai last week, I was thrilled to see Sam again. “We need to talk,” I told him, “I need to know about a certain girl.” He laughed. “I can’t believe you remember that. Well, there’s been some progress”. It was the final half hour on my last day when Sam and I finally snatched a moment to chat. “About six months ago I sent a message to her telling her that ‘I’m really missing you’. I said I couldn’t stop thinking about her. She wrote back asking me why. She said everything has stopped now and what was between us was finished,” Sam says, looking frustrated and confused. 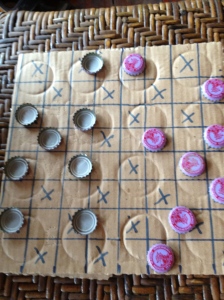 But matters of the heart are never simple and it turns out Sam is being pursued by a girl in his own village, who cooks for him and washes his clothes. “Who are you going to choose between, the one who loves you or the one who you love? I don’t know which one yet. This one at the moment is fine. She does everything for me. But I’m still missing Jaytarmon,” he says, as he pulls out his mobile phone with two photos of the gorgeous Jaytarmon on it. 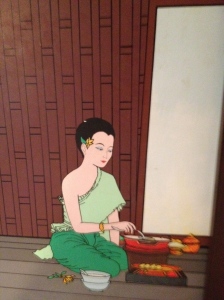 And Sam has plans. Grand plans. He hopes to stay at River Kwai Jungle Rafts for two more years and then save enough money to go to college for four years to become a car mechanic. He aims to open a garage at the border, between Burma and Thailand. There’s not a lot of cars down in these parts but Sam likes old cars. “You’ve got to think about doing something that is possible. And you must have a family and kids. When you are old your kids can take care of you. Jaytarmon’s mum really likes me. I have the green light from the mum’s side, but the daughter is still a yellow. I want to go to college and return back to the one I’ll always love.” 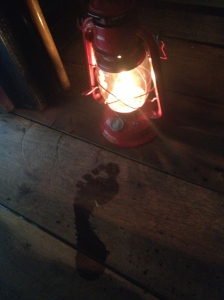 Our short time is up, and just as I walk away Sam points out the other girl. The one in his village who washes his clothes and cooks him food. “She’s good enough for me?” he asks. I turn and look him in the eye. “Follow your heart,” I say, before catching the boat home.

The Global Goddess travelled as a guest of Scoot Airlines (www.flyscoot.com); The Pullman Bangkok King Power (www.pullmanbangkokkingpower.com); The Tourism Authority of Thailand (www.tourismthailand.org); and the Ibis Bencoolen Singapore (www.ibishotels.com) 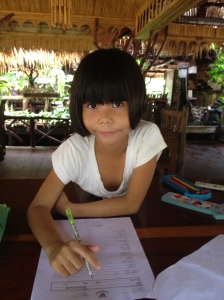 10 thoughts on “A Sam for all Seasons”