INTRIGUING news out of China reveals that despite there being 118 men to every 100 women – that is, a whopping additional 30 million blokes – more and more females are remaining single. And, not only are they single, but there’s a word for them: shengnu or “leftover women”, according to the latest edition of Marie Claire Australia magazine. Yes, like last night’s fried rice, if a woman isn’t married by the age of 28 in China, she’s left on the shelf, the report reveals.

Now, on the one hand, this gives me some hope. I was beginning to think it was just me who couldn’t find a partner and that maybe it was a specific Queensland problem with most of our blokes working in remote regions and down the mines. (In the north-west Queensland mining town of Mount Isa, there are seven men to every woman). But the best news of all about this report is it’s not only the men who are making the decision to stay single, it’s the women in China who now also believe the men are not up to scratch.

You see, these women have spent the best part of 30 years growing up, becoming educated, and in the case of many noveau riche, spectacularly wealthy in their own right, and they are now refusing to settle for second best. I mean, why would you?

Unfortunately, on the other hand, every Chinese man still believes he should marry a super model, with Marie Claire reporting that a matchmaking site called Jiayuan, which means Beautiful Destiny, revealing men want women with a “traditional, angelic smile” and…this will shock you…”large breasts and slim figures.” Still, some are still getting married, or at least, shooting wedding photo shoots.

Which pretty much leaves China, Australia and anywhere else in the world at a bit of a dating impasse, as this picture, below, demonstrates. (A tip: put away your mobile phones people, start talking, and whatever you do, DON’T kiss the girl in the middle).

I don’t have any solutions to this, or I would a very rich woman in a relationship. But I have decided to adopt a different approach. In the current edition of Brisbane Style Magazine there’s another interesting interview with Clinical Psychologist Dr John Barletta who talks about the desire to find a mate. His advice: “My counsel is to simply do things that give you pleasure and nourish you. If you are having a good life where you are relaxed, confident, accomplishing, and happy, people will notice that you are in a good space, that you are available, and they will see you as psychologically attractive and resilient.”

I have decided to embrace his advice and as such, am renouncing my bogan dating site. No more bad spellin’ fellas for me. Instead, for the rest of the year, I’m going to try all those things I’ve always wanted to experience. At least once. I’m going to do a Belly Dancing Class, try Zumba, learn Burlesque, head down to Manly on a Wednesday afternoon and jump aboard a sailing crew, stand-up paddleboard, take a surfing lesson, volunteer somewhere, perfect the art of Gnocchi-making, take a live-art drawing class. 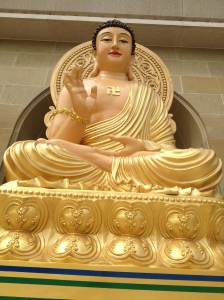 The Global Goddess took these photos while on a recent trip to Taiwan to which she travelled courtesy of Cathay Pacific’s Premium Economy cabin.

4 thoughts on “Can’t find Prince Charming, for all the tea in China”