I AM sitting in Chicago, the musical not the city, back in my hometown of Brisbane after one of my busiest years of travel yet. Accompanying me on this joyous journey is my best friend from Grade One. For more than 40 years this gorgeous girl and I have been playing dress ups and today is no different. We are revelling in the rare rain which is doing the hot shoe shuffle on the rooftop of the Queensland Performing Arts Centre outside, while inside, we are toe tapping to this marvellous musical. In my seat, I secretly applaud the happiness of having long-term friends and the bliss of being home.

And there’s no better way to celebrate this delicious destination than the razzle dazzle of Chicago, the longest-running American musical in Broadway and West End history, now perched on the banks of the Brisbane River in the Lyric Theatre. The opening act is sleek and sultry and doesn’t disappoint with its trademark All That Jazz. If you know nothing else of this sassy story, you’ll recognise this tune which transports you back to the 1920s and tells the story of some ballsy broads. You’ll adore the humour and one-liners such as “In this town murder is a form of entertainment”; admire the sheer athleticism of the cast; and marvel at the magic they perform on such a tiny sliver of stage.

There’s no fancy costume changes, everyone wears black, allowing space for the brilliant voices to really shine. Another awesome addition to this show is the stadium-style band set up, smack bang centre stage, and with which the cast, and audience, are invited to interact throughout the performance. The cast is delightful, and Australian audiences will recognise a few favourites here such as Tom Burlinson, who plays Billy Flynn the lawyer and at one stage is flanked by fabulous feathers; and Natalie Bassingthwaighte who is charming, cheeky, cute and convincing as Roxie Hart. The lesser-known Alinta Chidzey is equally brilliant as Velma Kelly. But it’s Casey Donovan as Matron “Mama” Morton who steals the show with her voluptuous voice and commanding presence. The audience went ballistic for the bold, brave and beautiful Donovan and so will you. 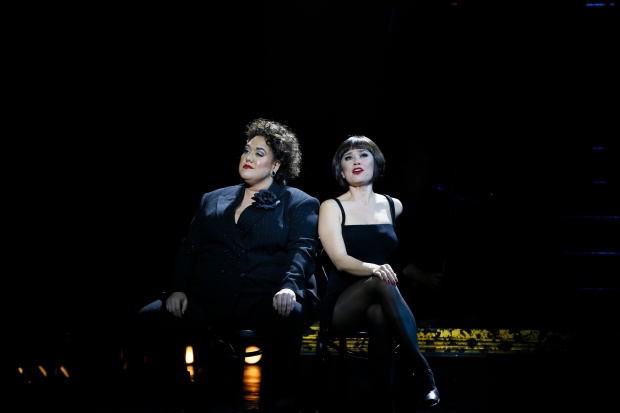 Delightfully, the band plays the audience out of the theatre to another rendition of All That Jazz where outside we discover a sunny Saturday afternoon. We dissect the show, and life itself, as we amble along South Bank, under the silver metal archways draped in purple bougainvillea, which reminds me of the colour palette of the new suite we are sharing at Rydges South Bank. Late afternoon and we pause at Rydges Soleil Pool Bar for a cheeky cocktail. It’s an Aperol Spritz afternoon and we lounge on couches as comfortable as our friendship.

By early evening we are perched at Rydges Bacchus bar, sipping a sparkly, and admiring the upmarket retro vibe. From our white leather bar stools overlooking several booths, it’s a little bit Get Smart replete with an impressive shelf of liquor and a bar manager who takes the time to chat. But another juicy journey awaits and we repair to the Bacchus dining room where, perched in a commanding chair redolent of Alice in Wonderland I sit while we embark on another adventure – the Spring Degustation. We start with a salacious selection of oysters before eating in earnest – there’s bread and a selection of amuse bouche; a Celeriac with sesame, lemongrass and roast potato broth; and Sashimi boasting apple, cucumber and celery, with Japanese hongarebushi. Each course is paired with wine which we discuss with gusto with the passionate and professional sommelier.

We continue with a Fish Pillow of gnocchi, cannellini, vongole and cuttlefish, before experiencing our most delicious dish of the degustation – Darling Downs Wagyu, with spinalis, smoked eggplant and camel cheese. The meal inches towards the end with a cheeky Cheese with house made chutney and raisin bread with pumpkin and five spice; a brilliant Blueberry unlike any other served with cake and zabaione; Coconut on the Beach with lime and butterscotch; and Petit Fours to finish. This degustation is like our friendship itself, long, surprising, delicious and delightful.

Sated, we repair to our room, this refurbished corner suite part of more than $30 million Rydges South Bank has invested into redesigning all of its rooms. There’s a desk and kitchenette for business travellers, plus a large l-shaped couch in the lounge room replete with huge television. The bedroom boasts a king-sized bed, another large television, and ensuite with shower and elegant egg-shaped bath. Rydges South Bank is the most perfect perch anywhere in Brisbane should you wish to catch a show. Its understated elegance works well for the laidback Queensland capital and for which this heavenly hotel has recently earned its position in the latest Queensland Hotels Association Awards Hall of Fame for Best Superior Accommodation. Rydges South Bank also received the Workplace Health & Safety Award and Guest Experience Supervisor Kait Einam was named Guest Services Employee of the Year. Not surprisingly, Bacchus was awarded Best Prestige Restaurant for the second year in a row.

It’s late at night and I stand on the breezy balcony of my ninth floor suite, from which I can see South Bank from one side, and Mt Coot-tha on the other. The Wheel of Brisbane is lit up like the full moon and the city lights across the river blink back at me, reminding me to savour salacious days such as these. Those rare moments in time when you have time to catch a show, snatch a slow wander, dive into deep chats, feast on a luscious dinner, and indulge in the luxury of retreating to a hotel suite to sleep. And to celebrate a city and friendship, which has stood the test of time…and all that jazz.

Rydges South Bank has launched a CHICAGO package which is available for stays from today, November 5, through to December 1 this year. The package, which starts from $550 includes:
Overnight accommodation in a luxurious guest room
Two A Reserve Tickets (evening performance) on arrival night
Valet car parking for one vehicle
Buffet Breakfast for two in Bacchus Restaurant
An official CHICAGO Show program
A CHICAGO themed gift on arrival
The Global Goddess was a guest of QPAC and Rydges South Bank – www. https://www.rydges.com/accommodation/brisbane-qld/brisbane-south-bank/
Photos courtesy of Rydges South Bank and QPAC.
Keep your eye out for upcoming shows and packages including Cirque du Soleil’s KURIOS which opens in Brisbnae on January 10. And if you eat nowhere else in this lifetime, dine at Bacchus. One of my most memorable meals anywhere in the world. 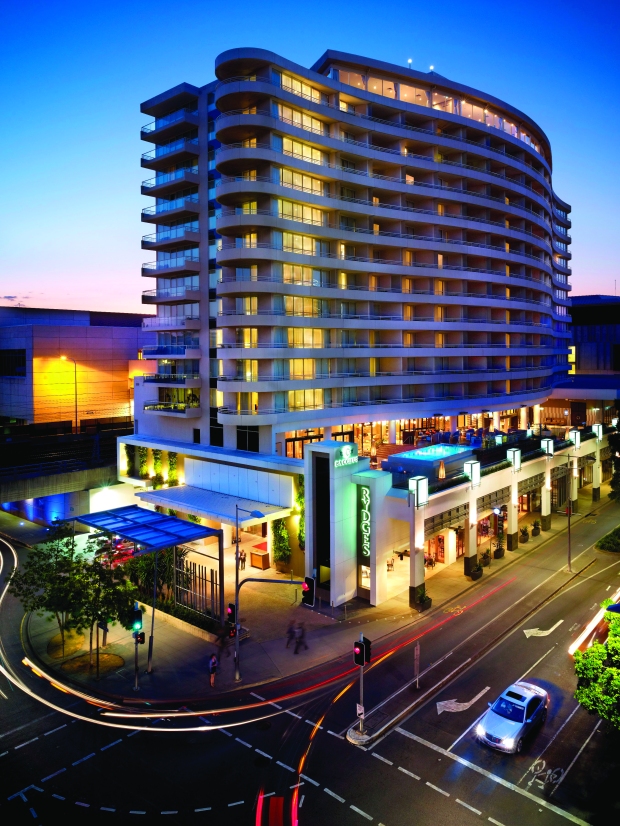