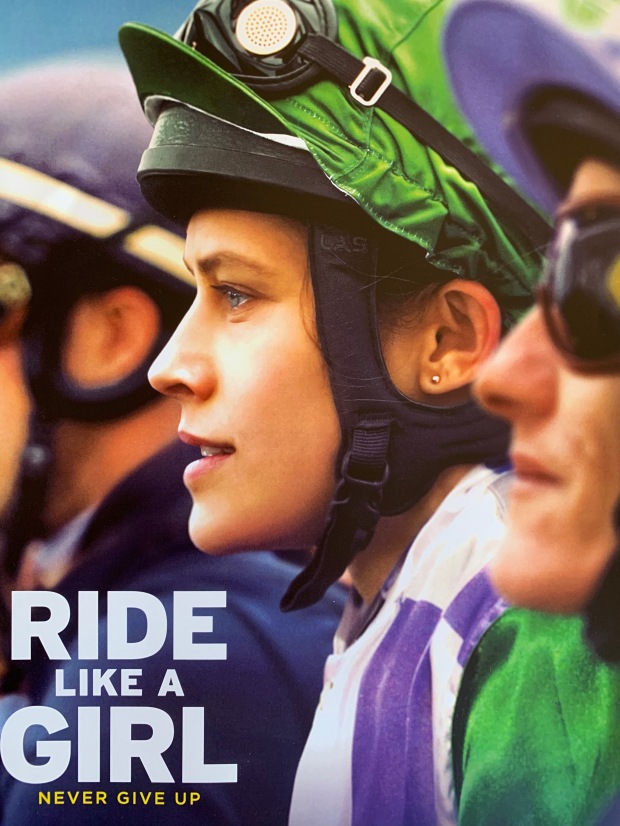 “The only thing that matters is the odds you give yourself,” Paddy Payne – father of Australia’s first female Melbourne Cup winning jockey Michelle Payne

I EXPECTED her to be more rough and tumble in person. An unpolished diamond. After all, this was the Aussie woman who told the world to “get stuffed”. And as for the actor sitting beside her? I anticipated she’d exude more airs and graces. But last night, when Australia’s first female Melbourne Cup winner Michelle Payne took the stage at the Brisbane premiere of Ride Like A Girl, she was petite, poised, confident and charming. Next to her, Australian actor Rachel Griffiths, who made her film directing debut with this movie, deliciously dropped the f-bomb and unapologetically stated “I just swore like a girl”. Things just got real.

Like the film itself, which debuts in Australian cinemas on September 26, these are two fabulous feminists telling audiences how it is. And just like these two strong, smart, sassy women, Aussies are going to love this movie which captures the moment a woman won the Melbourne Cup for the first time in its 155th history. Like most Australians, I remember that day well. On November 3, 2015, I made my annual trek to the TAB and put my usual $1 each way on the outsider. My life motto? Always back the outsider. At 100 to 1, I liked the odds on Prince of Penzance. Little did I realise at the time it was being ridden by a woman, or I would have put $100 on that horse that day.

Griffiths says she was at a barbecue on that 2015 Melbourne Cup Day and at the 300-metre mark of the race she heard the name Prince of Penzance, the horse that would carry Payne to victory.
“At the 200-metre mark I heard Michelle Payne and Prince of Penzance. I remember turning to the barbecue and saying ‘is there a girl racing? Are girls jockeys?’,” she says.
“My first thought was ‘what kind of woman would do that and what would it take to break that 155-year-old history of men winning the race?’
“Then she told the world to get stuffed and that was an Australian heroine. I had a feminist sports film that would make men cry.”

During this 100-minute film, you’ll learn that it takes a lot for a woman to win the Melbourne Cup. Payne, the youngest of 10 children, lost her mother when she was only six months old. She grew up in a chaotic household with her horse trainer father, jockey siblings, and her best friend and younger brother, Stevie.
Stevie, who was born with Down Syndrome, plays himself in the movie, and is considered the best strapper in the country.
After this film, he may well be considered one of Australia’s best actors too. 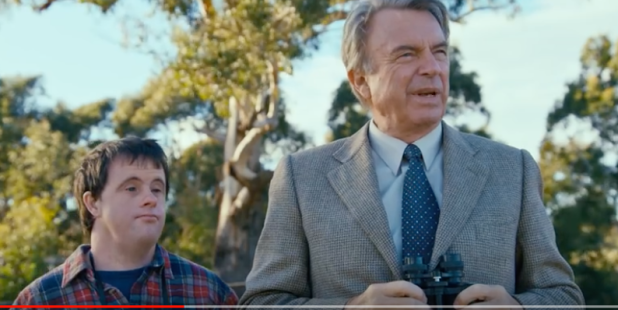 Payne says she was surprised after her Melbourne Cup victory that many considered her a one-race wonder, rather than understanding the sacrifices she made to win, including crippling injuries and multiple bone breaks, and the death of one of her sisters from a race fall.
As for the victorious day itself?
“I felt like I was so ready that day. I’d left no stone unturned,” Payne says.
“I’d watched the last eight Melbourne Cup races to see where it was won and lost.
“It was an eerie feeling to be going into the largest race in Australia but I was unbelievably confident and calm .
“Any other day, any other race, I would have been so nervous. I felt I was so ready for that race. When we went over the finishing line it was the most incredible feeling you could ever imagine.”

You’ll see plenty of well-known Aussie faces in this film including Sam Neill as Paddy Payne, Magda Szubanski, Mick Molloy and Shane Bourne. Lesser known Teresa Palmer, who plays Michelle Payne, stamps her authority as an actor to watch in this movie which will make you laugh and cry.
This isn’t so much a story about horse racing, as it is about a sista sick of sexism in her industry.
Payne confessed to the Brisbane audience she would have preferred there was no film and was “just happy to go about my business” after the Melbourne Cup.
“But I started to get really excited about it. My dream was winning the Melbourne Cup from five years old and it became so apparent it was so much more than that,” she says.
“I had my role models of my sisters being female jockeys and this film gives me the chance to give back. If this film can give young girls inspiration for a dream…that’s what makes me so proud.
“Not only that, having Stevie a part of that, who in my opinion steals the show. People with Down Syndrome are so capable of so much. When Stevie was born people said sorry, like it was at tragedy. He brings so much joy, he’s hilarious.”

Griffiths says the film title came to her because growing up in Australia, the phrase had a negative connotation.
“It’s kind of crazy as a woman that when growing up ‘like a girl’ meant giving up, not doing something well,” she says.
“For young girls it must be so dismaying to hear that used as an insult. ‘Like a girl’ means winning.”
Curiously, Payne has a different take on the title.
“I was really intrigued by the choice of the name. For me, it was a whole different meaning. I fought the battle that we are not strong enough. That was part of the reason for the ‘get stuffed’ comment,” she says.
“I think that ‘ride like a girl’ is an advantage in so many ways. It is being at one with your horse and developing a connection where that horse wants to try for you.
“I think for a lot of the boys it is about strength. They are hustling and bustling, while you see a female rider, it is smooth and beautiful to watch. We bring a whole different element to racing. I proudly ride like a girl.” 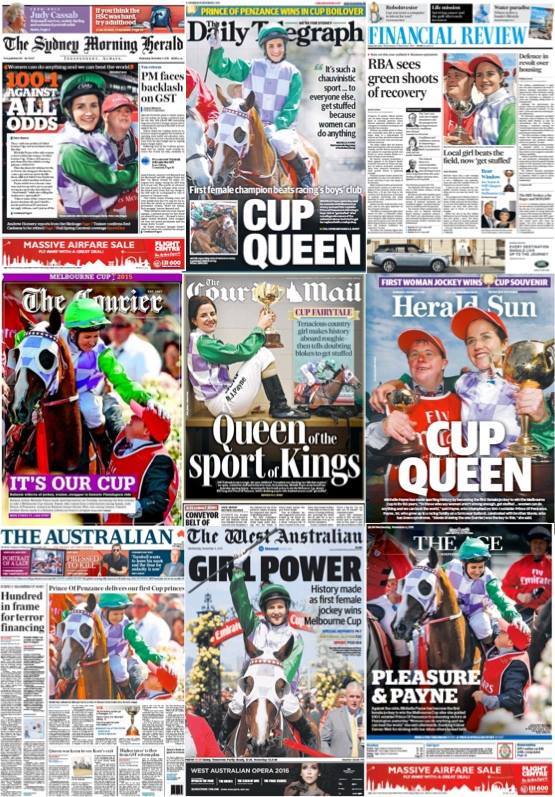 Ride Like A Girl is out in Australian cinemas on September 26. Go and see it, and always, always, back the outsider. And For God’s Sake, ride like a girl.
(The Global Goddess attended the Brisbane Premiere as a guest of Transmission Films. Photos courtesy of Transmission Films’ Official Trailer)