THE almost full moon is playing hide and seek under a tattered crochet rug of cloud and I am crouched around Clyde’s Pond, admiring acrobats. Hours earlier, I’d missed the annual ritual of climbing to the Hilltop at the Woodford Folk Festival to applaud the last sunset of 2017. The weather had other plans, you see. But the fierce thunderstorm predicted for the site, in the belly of the Sunshine Coast hinterland, barely raised its voice, as I sought shelter in the Coopers Bar, cradling a cold beer, and singing with the motley musicians gathered in a circle. Turns out Grandma’s Feather Bed was not a shabby Plan B at all.

New Year’s Eve 2017 and the rain retreats as quickly as it’s gathered, cleansing the site, showering our souls. If ever there is a place to spend that no-man’s land which is the week between Christmas and New Year’s, this is it. A time for replenishment and renewal. And here’s the 10 things I took away from this year’s event.

1. Go with the flow
I deliberately go to the Woodford Folk Festival with very few plans (aside from climbing to the Hilltop for the last sunset of 2017…and look how that worked out). Because, life, as we know it, has other ideas. And besides, with so much of life scheduled, where I can, I try to toss away the calendar. If I’m working from home in Brisbane, sure, I have an idea of what I’d like to achieve that day, but things get in the way. And if I’m travelling, I’m even more open to the universe. And that’s the lesson. Go with the flow and you will be richly rewarded.
2. Silence is golden
My second favourite tradition of the Woodford Folk Festival, and one where no weather can interfere, is the three-minutes of silence the entire site respects at precisely 11.30pm on New Year’s Eve. For three eerie and earthy minutes, all the bands ground to a halt, and 35,000 visitors on site pause to remember those they’ve loved and lost that year, while holding a lit candle. In a world in which we are inundated with noise, there’s a maudlin magic to this moment. Try and snatch a few seconds of silence every day.

3. Talk to strangers
Remember when you were a kid, and you were ferociously warned against talking to strangers, and for good reason? Well, you’re an adult now. Woodford has this precious power that upon entering the festival, you become a better version of yourself. Kinder, softer, more gentle with yourself and those around you. And all of a sudden, you find yourself chatting to complete strangers. Revelling in a shared experience. Maybe take some of this back out onto the city streets. You might be surprised at its effects.

4. Nourish yourself
Not only did I indulge in some fabulous food at the festival: think slow-cooked lamb and the best Yemeni chicken wrap I’ve ever eaten (OK, so I’ve never eaten anything from Yemen, which made this even more special) – but Woodford is all about nourishing the mind, body and soul. Take the time to have more massages, do some yoga, join a meditation group, take an art class, try something different. Love thyself and treat yourself like you want others to treat you. 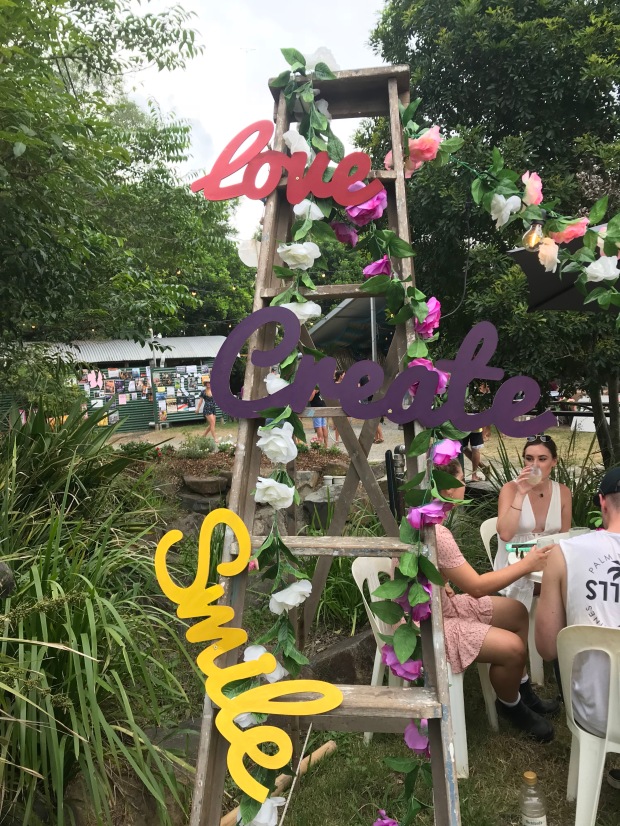 5. Give peace a chance
There was a really interesting installation at this year’s festival, a replica of the Montreal bed in which John Lennon and Yoko Ono staged their “love-in” for peace. Visitors could dress up in some cool gear and plonk onto this bed, to have their photo taken. There was also a flash mob for peace, and plenty of signs promoting peace. After all, if we don’t give peace a chance, what chance have we got? Embrace peace, whether it’s big or small. You don’t have to fight every battle.

6. Nothing is ever what it appears
Random acts? They’ve got them in droves at the Woodford Folk Festival. One minute you’ll be walking down a weirdly-named ally (there’s plenty of these here too), the next, you’ll stumble across some punchy performers. When is a pineapple not a pineapple? When it’s a bar, of course. Keep your eyes and your mind open to life, and the good stuff seeps in.

7. It’s OK to play
Give yourself permission to play. Dress up in a costume, assume an alter ego, let your imagination run as wild as a brumby over an open field. You’ll find plenty of play at Woodford. Step out of your version of you and wrap yourself around a wilder adaptation. Go to a local park and jump on the swings. Dance around the house. Sing in the shower. Catch waves at the beach. Plunge deep into yourself and pluck out that child that once played.

8. Connect more
Sure, we live in the most technological era in history, but how much do we really connect with those around us? How close are you really to your 500 Facebook friends? Check in on your mates. Go crazy, pick up the phone and ask them out for dinner or a drink. Two things I loved at Woodford – this gigantic post box where visitors were encouraged to pen a letter to someone on site, and it would be delivered; and the phone a granny booth, where, for various hours each day, you could catch a chat with grandma.

9. Recycle more
The fine folk of the Woodford Folk Festival have been leading the way with recycling for years and each festival, it just gets better and better. (That’s another thing I love about Woodford, you can go every year, and there’s always something different). I adored the giant bamboo structure in the guts of the ground; had a few lazy drinks in the Vinyl Lounge (think your grandmother’s living room); and adored the giant sculptures made from recycled materials.

The Global Goddess was a guest of the Woodford Folk Festival. To find out more about the 2018 festival, or other events on the site during the year including The Planting Festival, from May 4 to 6, go to https://woodfordfolkfestival.com