THE green ferry is paddling across Sydney Harbour like a sanguine sea turtle and the sparkling city resembles an Outback night sky. Turns out it’s a celestial weekend in every sense of the word. I’m in Sydney for the Australian Federation of Travel Agents (AFTA) National Travel Industry Awards in which I am a finalist for the Best Travel Writer and I am staying at The Star Astral Residences. Let me be clear upfront: when I refer to “stars” in this blog, I am not referring to myself. I like to think of myself more as a Halley’s Comet – showing a flash of brilliance once every 75 years or so.

I’ve been upgraded to a one-bedroom suite befitting of a celebrity far more cool than this Brisbane broad who always feels a bit out of place among the lurid lights and screaming sass of the southern capital. From my perky perch on the 15th floor, from which I have a view across Darling Harbour of the city’s skyline, I have a yawning, sunny balcony, a downstairs lounge room, dining, kitchen and powder room. Upstairs, there’s a bedroom, bathroom, two more toilets and my favourite room of all: a media nook in which they have plonked a ruby, red velvet couch which swivels.

Just when I think I’ve stumbled across the most beautiful hotel room in Sydney, I am shown the latest additions to The Star: three “experiential” studios all of which sport different themes. Chic geeks will adore the Cyperpunk Studio replete with four 65-inch TV consoles as well as its own virtual reality chamber. Then there’s the 70s Glam Studio where the couch comes complete with a hole for your champagne ice bucket and a rotating disco ball hangs from the ceiling. No surprises that my favourite suite is the Dark Romance with its art-deco furnishings, four-poster bed and a romance button where the lights are automatically dimmed and a fireplace bursts to life. 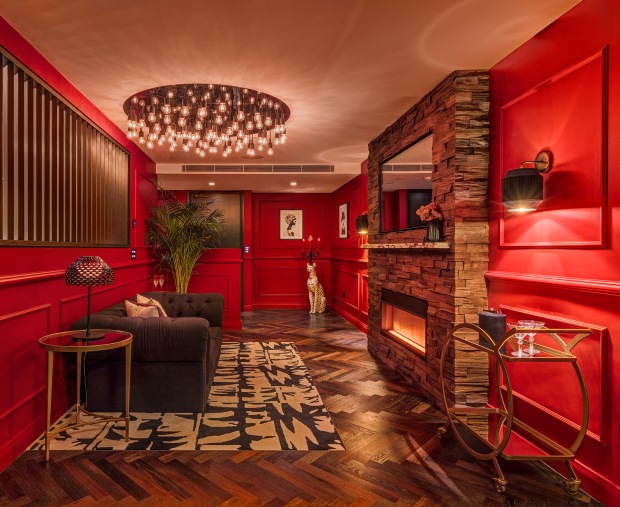 Alas, there is no one on this trip to light my fire, so I scurry back to room I privately label the “no romance suite” (which has everything to do with appalling love life and nothing to do with this gorgeous suite) and collapse on my ruby couch to spin and contemplate romance for a while. But not for long. There’s a decadent afternoon in The Darling Spa (one of three hotels in the Star complex apart from the Star Residences and Star Towers), where a pretty Parisian called Pauline pampers me in a relaxing massage. In February, The Darling was named the first and only five-star hotel in Sydney by the influential ForbesTravelGuide.com.

My five-star experience continues that evening at the beautiful Balla, a fine Italian restaurant within The Star complex and from which I spy my turtle ferries crossing the inky night waters of Sydney Harbour. The Sydney Harbour Bridge winks at me as I dine on duck ragu gnocchi followed by wagu steak, washed down with an Italian Montepulciano. The one benefit of being such a booze hag is that I know my wine and this is a fine drop indeed. I finish this feast with a soft blue gorgonzola cheese with cherries in balsamic vinegar, and a cherry liqueur. Another benefit of staying at The Star is that if you don’t finish your bottle of wine (I know…there’s a shock), and while under law you are not able to take it with you, room service will collect it and deliver it to your suite.

It’s a late breakfast at The Star’s Harvest Buffet the next morning where I appear to have entered Willy Wonka’s Chocolate Factory. There’s not one, but three chocolate fountains among a range of international cuisine as well as your standard breakfast fare. By the time I have lunch downstairs at Pizzaperta, and spend the afternoon drinking the rest of my red wine with a mate on my sunny deck, I realise I haven’t left The Star complex since I checked in, 26 hours ago. For a travel writer who is always on the go, this is one of life’s great luxuries. It’s a short cab ride to the Sydney Convention and Exhibition Centre for the AFTA awards where, although I didn’t win, I come home with a gorgeous glass trophy.
Yes, it’s been a weekend of stars and I suspect this particular Sydney stay will be hard to eclipse.

The Global Goddess was a guest of The Star. A night in the Cyberpunk and 70s Glam Studios starts at $1500. A night in the Dark Romance Studio starts at $500 and the Suite in which I stayed at between $400 and $500. http://www.thestarsydney.com.au