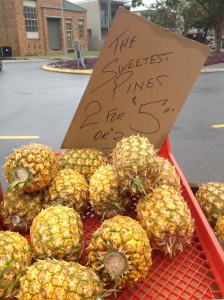 JUST when we thought Australian politics couldn’t become any more bizarre, Prime Minister Tony Abbott proved us all wrong this week, when he threatened to “shirt-front” Russian President Vladimir Putin during the G20 summit in Brisbane next month. Being a Queenslander, I have to confess I had no idea what this shirt-fronting business was all about, and for several hours I thought there might be some kind of bro-mance going on between Tony and Vlad. For those who don’t know what this quaint turn of phrase means, it is apparently an AFL term to describe a front-on charge designed to knock an opponent to the ground. Frankly, since learning this, I haven’t stopped laughing all week. 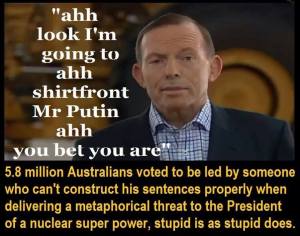 Apparently the Ruskis think it’s pretty funny as well, with Russian embassy official Alexander Odoevskiy telling Fairfax Media that he had “learned a little more about Aussie Rules football”. Odoevskiy went on to say “We are not sure when the Prime Minister would like to shirt-front the Russian President.” So, in the spirit of this great city in which I live, I’d like to offer up 10 Perfect Places to shirt-front a Russian President in Brisbane. (Hey, you never know when it may come in handy).

1.Head to the Cauldron
Ok, so we’re more into rugby league than AFL in Brissie, but don’t worry, we still know how to go the biff. Of all the places in the Queensland capital which has seen its share of fights, it’s got to be Suncorp Stadium or “The Cauldron” to locals. What many people don’t know is this hallowed turf was once a cemetery (I’m just sayin’ Tony). If the thought of Tony (a keen cyclist), beating up Vlad (a judo expert) makes you thirsty, head to the nearby Caxton Hotel, which has also seen plenty of bust ups over the years, particularly during State of Origin. Locals call this hotel “the Cacko” and after you’ve seen Tony take on Vlad, you’ll be laughing too. http://www.suncorpstadium.com.au; http://www.caxton.com.au
2.Make Love, Not War
I like to think of Brisbanites as lovers, not fighters. But we do have a secret war history. Few people realise that General MacArthur based the Allies’ southern pacific headquarters right here in Brisbane during World War Two. Today, the MacArthur Central shopping centre stands in the same building. For more of a war tour head to the MacArthur Museum and see the impact the events in Europe and the Pacific had on Brisbane. Entry fee costs $5 for adults. Tony, I’m happy to pay your entry fee, if you promise to stop picking on the nuclear giants. http://www.mmb.org.au

3.Got a Beef with the Russian President?
God, how we love a good steak in Brisbane. In honour of his bullish behaviour, I’d recommend Tony take Vlad straight to the Spanish Garden Steakhouse at the Breakfast Creek Hotel. It’s on the way from the airport, so it’s real handy, and the beef is good too. Still dancing around the issue, Tony? Then head to Cha Cha Char! for some of the best wagu in town. Given I’m dining out on the worst Prime Minister in Australian history, I may as well recommend the “Worst Vegetarian Restaurant” as well. Yes, the Norman Hotel makes this cute claim. Step away from the steak knives, Tony.
http://www.breakfastcreekhotel.com; http://www.chachachar.com.au; http://www.normanhotel.com.au
4.Bridge That Golf
What blokes in the history of the world haven’t patched things up over a game of golf? But let’s keep this one simple. Rather than going to some fancy, smanchy course, I recommend the Victoria Park Golf Complex for Tony and Vlad. This course offers some of the most challenging putt putt on its 18 hole course with Brisbane skyline view. Best of all, Tony, it comes complete with sand and water traps, a rocky terrain, swinging poles and even punching bags. http://www.victoriaparkgolfcomplex.com/golf/puttputt.html 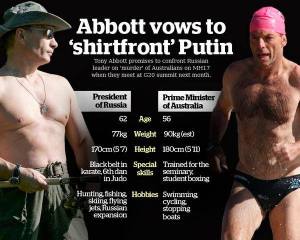 5.The Smoking Gun
This one was a no-brainer really. Tony, you might want to bulk up before all that shirt-fronting, so I recommend you head to The Gunshop Café at West End. Mate, you’ll love it but don’t get too excited. Yes, this was a former gunship where they sold firearms, but the only smokin’ thing these days is the food on the menu. Has anyone told Vlad lately he’s got nice guns?
http://www.thegunshopcafe.com
6.Bombs Away
This former World War Two bomb shelter is now a cigar bar in South Brisbane. Just think, Tony, no one will hear the screams. Yes, behind this mysterious red façade you’ll find some of Brisbane’s best coffee as well as a couple of Cubans. I mean cigars, not actual Castros. Although Fidel would fit in well with this whole shirt-fronting scenario, I reckon. A quick Google search reveals Putin does not smoke (nor drink, apparently), so the upstairs smoking deck may be lost on him.
http://www.paladarfumiorsalon.com/Bienvenido.html

7.Stayin Alive
I reckon a day at the bay down at Redcliffe should sort everything out between this pair. Tony, what I suggest is you take Vlad for a lovely stroll along Bee Gees Way, which pays homage to these local lads who set the world on fire. Still feel like Jive Talkin’, then take a wander along the Redcliffe Jetty. Testosterone Tony, how about you get your James Bond on and strap yourself in for a tandem skydive over Suttons Beach? (Vlad, I recommend you pack a separate parachute). http://www.redcliffe.net.au/visitor-information.htm
8.Cuddle A Koala
Who can stay angry when you’re cuddling a koala? And Lone Pine Sanctuary has 130 of these furry little beasts with names like Rory, Sinnamon, Lina, Rose and Beck. But, best of all, there’s a platypus named Barak – who most tourists call Barack. Yes, as, in Obama. Now, if anyone can sort out this shirt-fronting mess, it’s Obama. http://www.koala.net

9.In Pursuit Of Libertine
This suggestion might be a bit girly, but Tony and Vlad can create their very own love potion at Libertine Parfumerie at New Farm. This place offers masterclasses in the art of fragrance and features a huge range of products.In fact a number of their scents have been worn by world leaders including Winston Churchill and Napoleon. Their fragrance Creed is 250 years old and is worn by the Obamas. Another fragrance, Love In White, has been worn by 3 or 4 US First Ladies. Let’s call this new fragrance the dirty shirt-front.
http://www.libertineparfumerie.com.au
10.Get A New Shirt-Front
In case we are all wrong, and all Tony really wanted to do was actually buy Vlad a new shirt, there’s a few interesting options in Brisbane. At Mitchell Ogilvie – which has a secret bar in the store – it’s rumoured that $30,000 suits are currently walking out the door in the lead up to G20. The boys could also head to the The Cloakroom, which offers a modern tailoring service. But Tony, you can do your own ironing. I don’t care what you say about how “the women of Australia” like to spend their time.
http://mitchellogilvie.com; http://www.thecloakroom.com.au

9 thoughts on “Putin On the Ritz: Top 10 Places to “shirt-front” a Russian President in Brisbane”