AN item on the menu catches my eye. For around $282 I can partake in a four-course meal featuring some of the most sought-after Chinese delicacies used in traditional medicine for their health benefits, some of which are said to even cure impotency, followed by a collagen-boosting facial and seawater-infusion massage. And I can even enjoy some Birds’ Nest dishes, which, among other things, are said to increase my libido. Lust being the least of my worries, I eschew the exotic eats and treats and head straight to the spa itself where a Balinese life guard stands poolside and encourages me to run against a series of strong currents and be blissfully blasted by a range of other jets for the next two hours.

I’m at RIMBA Jimbaran Bali, the new 8 hectare resort nestled within the award-winning AYANA’s 77 hectare grounds overlooking Jimbaran Bay. And in typical form, I’m looking for love. Guests at both properties can use all facilities, so I figure two resorts are better than one, and divide my time on the hunt for erotic experiences. While RIMBA’s “Beyond Skin Deep” package at the renowned Ah Yat Chinese restaurant is indeed tempting, I consider instead stopping at AYANA’s L’Atelier Parfums and Creations where for $80 and 45 minutes of my time, I can create my own perfume. Or, in my case, a love potion. Unfortunately, the island is all out of eye of newt, so I head on to my next destination, a cocktail at the world-famous oceanfront bar Rocks. I follow this up with a seafood dinner plucked straight from the ocean before me under a beautiful Southern Cross sky at Kisik. This is feet-in-the-sand romance at its finest, a concept not lost on a fellow female yoga friend and me as we gaze at the stars and ponder our lack of love. 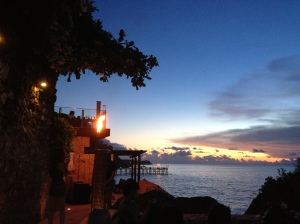 Back at RIMBA, ardent admirers of conservation will adore what this resort has created. Opened last November as a sister property to the luxurious AYANA, RIMBA is named after the Indonesian word for “forest”. This resort, which overlooks the Uluwatu Hills on one side and the Indian Ocean on the other, has embraced integrity through its design and razor-sharp environmental principles.

The ark-shaped lobby ends in a giant pond which resembles the shape of a ship which is fitting, as the lobby itself is made of recycled wood from three old fishing boats from Sulawesi and driftwood gathered by hand along a stretch of beach. On the walls you’ll find handmade bricks, in the roof-top bar recycled glass bottles, and in the rooms, furniture crafted from old packing crates. Sustainability is king here, with a rainwater harvesting and water recycling plant plus an on-site greenhouse and organic fruit garden. 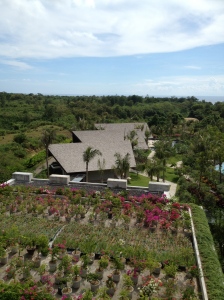 When it launched, a traditional “rainstopper” was enlisted to seek the blessings of the Gods for a dry event to ensure the perfect sunset. It worked and the proverbial sun has been shining down on this property ever since which is just as well, given there are six pools alone here.

So with so much good, where is the bad as the title of this piece suggests? Well, I actually agonised over how to start this piece. You see, the day I arrive at RIMBA a Queensland man has been detained upon arrival at Denpasar Airport after trying to enter the plane’s cockpit during a Virgin flight. Even worse, he’s from my hometown of Brisbane and the incident makes headlines around Asia/Pacific. I am embarrassed and ashamed of my fellow countryman. Bali has become a divisive destination in the past decade or so following the Bali Bombings, Schapelle Corby’s detention and recent release, and the Bali 9, who still ponder their fate in Kerobokan Prison. And while these headlines are surely show stoppers, they have one common denominator – they have little to do with the average Balinese.

In his book Bali Raw, Australian expat Malcolm Scott spells out in detail some of the unsavoury aspects of Bali. He talks of emerging crime and culture clashes among gangs from some of Indonesia’s other islands. Add to that recent reports of rubbish on some of this island’s beaches and it would be all too easy to avoid Bali altogether. Don’t. Boycotting Bali due to Bintang bogans is like avoiding the entire Gold Coast because of some of the strife in Surfers Paradise. Or New York because of the World Trade Centre bombings.

And then there’s the Bali. My Bali is one of beauty, peace, culture and coconuts. Of colourful characters, crooked smiles, frangipani flowers and food, glorious food. And you’ll find plenty of these elements at places such as RIMBA which is doing its best to remind the world that Bali is indeed the Island of the Gods.
Bali may not be big – it’s only about 100km wide and long – but it’s huge of heart. You’ll rediscover this heart at Rimba and at her sister AYANA through the people, the properties, and the professionalism. Take another look at one of Australia’s nearest neighbours. You might just fall in love all over again.

The Global Goddess was a guest of Rimba Jimbaran Bali. For more information go to http://www.rimbajimbaran.com

4 thoughts on “The Good, the Bad and the Bali”

Leave a Reply to A Glass Half Full Cancel reply