LET’S DO THE TIME WARP
A confession: The Global Goddess has never seen The Rocky Horror Picture Show. Yes, when everyone else in dance clubs is taking a jump to the left, and then a step to the right, I have absolutely no idea what is going on. So, I am most excited to discover the Rocky Horror Show musical will open at Brisbane’s QPAC Lyric Theatre on January 10 as part of a national tour. And the Accor hotel brand – the official accommodation partner for the 40th anniversary party production of the show – is offering Stay and See packages which include overnight accommodation, one A reserve ticket to the show and ticket booking fee. It’s enough to make you put your hands on your hips, and bring your knees in tight. http://www.showbiz.com.au

HOTEL MAKES A POINT WITH FREE WI-FI
One of the hottest topics among travelling circles at the moment is the subject of free Wi-Fi. Essentially, none of us can understand why hotels don’t offer it, or at least something that resembles affordable. The Global Goddess is still stunned she can get free Wi-Fi in a poor fishing village along the Mekong Delta, but not in some Australian cities. So, it’s refreshing to see The Point Brisbane offering complimentary, high-speed Wi-Fi access with unlimited downloads to all guests. This Kangaroo Point hotel has just invested $100,000 in an extensive IT upgrade to enhance performance and online security. That, in The Goddess’ books, is reason enough to stay in one of the 201 rooms or suites, hold a meeting or event, and dine at its restaurant Lamberts. http://www.bestmanagement.com.au 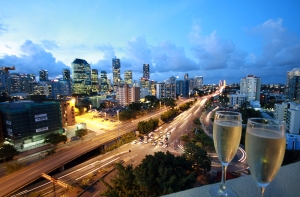 I’D LIKE OMAN
Two things the Global Goddess loves: waterslides and the Middle East. Combine the two and you’re looking at Oman’s first water park due to open in 2016 at a cost of $110 million. Situated 72km north of Muscat, the water park will stretch over 25,000 square metres and will be the first of its kind in the Sultanate. Australia’s Sanderson Group, who developed Warner Bros Movie World on the Gold Coast, is behind this development. The Global Goddess has never been to Oman, but has been to nearby countries such as Jordan, which she enjoyed immensely. But don’t wait until 2016 to get to Oman, think about a trip there now for its long, white sandy beaches, dramatic mountain peaks, vivid green oasis and mystical desert camps. http://www.tourismoman.com.au

SPA RESORT UNDERGOES A DETOX
A few years ago, The Global Goddess happily attended Absolute Sanctuary, a detox and yoga resort in Thailand’s Koh Samui. I say happily, but it was a much-needed detox for this sometimes wild child. That’s not to say I did not spend the week before with my friends, “carb loading” for what lay ahead, and I may or may not have snuck down to the beach the night before with a mate to drink as many Mai Tais as possible. I needn’t have worried. The food was plentiful and tasty, the daily spa treatments a real treat and the rooms and pool divine. The resort has just finished a six-month facelift, boasting a Moroccan theme, newly painted rooms, larger televisions and a dedicated new guest lounge. To celebrate its unveiling, the resort is launching a special end-of-year rooms promotion with 30 percent discount on its superior rooms during selected dates in November and December. http://www.absolutesanctuary.com 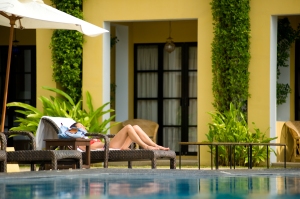 DESIGN FOR LIVING
No, The Global Goddess hasn’t gone all domestic goddess on you – Design for Living is the name of the play she saw last week. This production, based on Noel Coward’s 1930s production, follows the lives of three central characters and their intertwining love lives. In Act One, you’ll find interior decorator Gilda living with painter Otto in a shabby Paris studio, but she’s spent the night with Leo. In Act Two, Gilda is now living with Leo in London and by Act Three she’s moved on to Ernest (a fourth character) in New York. It sounds complicated (what’s not when it comes to love?) but it’s a delightful and often hilarious look on life. And, it’s the final production for the Queensland Theatre Company for this year. So treat yourself to a night out. http://www.queenslandtheatre.com.au 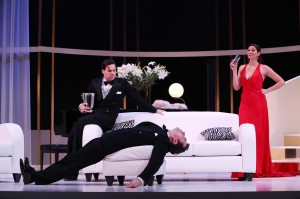 WIN THE CHANCE TO LIVE A LIFE OF SUNDAYS!
The Global Goddess first met Kayleen Allen 13 years ago when they both worked together at Tourism Queensland in the best jobs in the world…promoting Australia’s leading tourism destination. Now, Kayleen has taken her passion for professional and personal development and launched a new business called Life of Sundays. Using the teachings of self-development guru Louise Hay, Kayleen offers a range of half, full-day and two-day programs and retreats where you will learn to feel valued and appreciated for you are, loved, nurtured and safe to explore your story, past beliefs and to unlock your true potential. Her next “Heal Your Life, Achieve Your Dreams” workshop will be held in Brisbane on December 7 and 8.
***
One lucky Global Goddess follower has a chance to win a spot at this two-day workshop, valued at $850. Simply go to http://www.theglobalgoddess.com and, make sure you’re a follower by clicking on the FOLLOW button in the bottom right hand corner. Go to this post, and in the comments section, simply tell me what your Life of Sundays would look like. The competition closes at 5pm on Wednesday, November 13. The winner will be announced in The Goddess’ Briefs on Friday, November 15. For more information or to book the workshop, contact kayleeen@lifeofsundays.com.au

10 thoughts on “The Goddess’ Briefs: Travel & Lifestyle tips for smart, strong, sexy and spiritual women (and the great men who love us!)”