“An awkward morning is better than a lonely night,” Graffiti on the toilet wall at The Woodford Folk Festival.

I’M in Bill’s Bar when the delightful Doreen takes my order. “He must be hot, young and smart,” I tell her. Doreen isn’t just any old waitress, she works at the Meet Market where dating dreams come true. “What else do I want?” I ask Doreen. “Someone who treats you like the Goddess that you are,” she replies. “How do you know I’m a Goddess?” I ask her in amazement. “Darl, when you’ve been in this game long enough, you just know.” And with that, she hands me a carbon copy of my order straight from her notebook.

Unfortunately, later that day, Doreen also accosts one of my gorgeous gay male friends and tells him she can find plenty of women for him. Gay-dars, it appears, don’t work quite so well out in the Australian bush.

I’m at the annual Woodford Folk Festival, about an hour and a half north-west of Brisbane, re-setting my soul for the year ahead. The previous evening in The Joy Luck Club tent I’ve already attended Jon Bennett’s show “Pretending Things are a Cock”, which is pretty much as the title suggests. Jon’s brother Tim used to be obsessed with his own penis, to the point he would put it in Jon’s ear. A childhood prank has since spawned a career for Jon, who now travels the globe, taking photos of all things phallic. You’ve never thought of the Statue of Liberty as a penis? Think again. 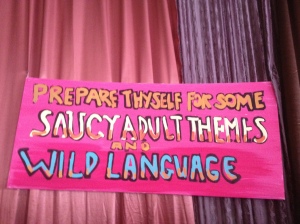 But if you think this is a sex fest, you’d be mistaken. Nor is it only for happy hippies. For one week between Christmas and New Year, Woodford is the place where ordinary people can simply suspend reality. Listen to some great music, participate in enlightening talks, meet random people, eat, dance, laugh and camp. A place for acrobrats and artists. And most of all, where you can open your mind. Shake off the cobwebs of the year just gone.

The crowd laughs, but nor is this a love fest. The dirty, smouldering issues like coal seam gas, fracking, climate change and whaling in the Southern Ocean simmer all week long in the Greenhouse tent where experts such as Professor Ian Lowe talks about the rise of the Eco Warrior. 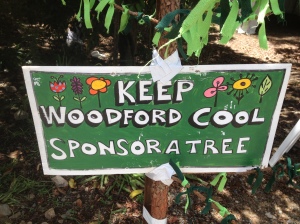 In the middle of a sassy summer storm after a sultry day, a panel in The Blue Lotus tent is talking about bullying and examining how it may be linked to creating a creative class. Those kids that are picked on and socially isolated learn some pretty crafty tricks such as conjuring up imaginary friends with whom to play. Daydreaming of nicer, colourful worlds where everyone is kind. They become the masters of perceptiveness, awareness, intuition.

Under the canvas at The Grande, Spain meets surf music in the form of long-haired Latinos Los Coronas, a band which sounds like matadors have arrived in Maui. Acclaimed Aboriginal singer Archie Roach packs The Amphi & Hilltop stage as does the John Butler Trio. Kate Miller-Heidke kills it at The Concert and Women in Docs is in luck at The Duck.

Back in The Blue Lotus, Sunshine Coast Astrologer Lyvea Rose doles out the skinny on the year ahead. “Between 2013 and 2015, the corrupt kings will fall. The hippy movement which started in the 60s will be realised. Don’t attach to old structures like banks and bosses. It’s a revolution of the heart. Make love, not war. Become the king or queen of your own life. Simplify your life. It’s an excellent year for healers and artists.”

And best of all? Venus is apparently more laid-back this year. Women will be pursued by men. It is, according to Lyvea, a “sexy and stylish” year. 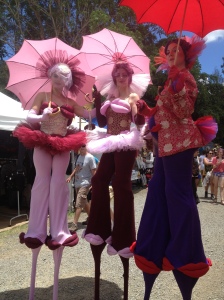 Happy 2013. May your most delicious dreams and wildest desires come true. I know what mine are. I’d love to hear some of yours…

To find out more about the Woodford Folk Festival go to www.woodfordfolkfestival.com 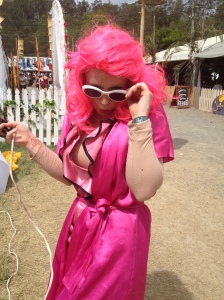 One thought on “Hippy New Year!”