THOSE same old scents are still there on those same old streets. I catch the perfume of Peking duck, plump and perspiring, a little like me, as I saunter along these sultry pavements. They speak of sweat, soaking showers and dried seafood in the markets. There’s pungent coiled incense spiralling out of the temples, tempting me inside. The trim trams and red taxis are still rattling along the roads, the latter still as manic as ever. A coffin shop sits next door to a coffee shop. On Victoria Harbour it’s all rickety, rockety boats, the sea a cellulite of bumps. This is Hong Kong and in a way, it’s a homecoming.

Twenty-five years ago, as a young cadet newspaper journalist and when Rupert Murdoch still owned the South China Morning Post, I was sent to work and live in Hong Kong and gain some valuable news reporting skills. I was a green Gold Coast journo, not the jade you’ll still find in the markets here, but naïve. But, back then, journalism was all about being plunged into the deep end, and so I dove, hard. On any given day I’d be running around the sordid back streets, uncovering stories on illegal rhino horn being used in Chinese medicine. Chasing celebrating stock brokers when the Hang Seng hit record levels, and breaking a front-page yarn on Filipino maids that were not allowed in lifts in which dogs were allowed, in the lofty heights of Mid-Levels living. These were heady Hong Kong days indeed. 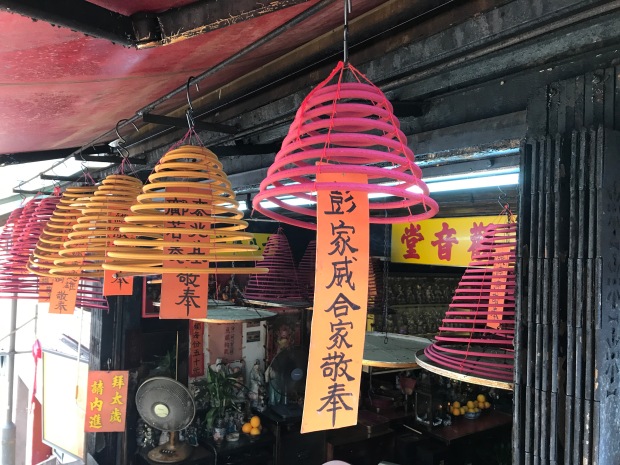 Last week, I returned for the first time in two decades. Wondering whether I’d find more change in this city, or myself, over the past 20 years.
Mr Chow, my limo driver, picks me up at the airport with a broad smile and a face full of opinions on the past 20 years on Hong Kong.
“We are always arguing on the political issues with China. Hong Kong people became used to their freedom. Since we went back to China we are feeling our freedom less and less,” he says.
“Before if there was a protest the police would just stand by. But now the police are becoming involved. They are controlling freedom of speech.
“The population has now grown from 5.7 million people to 7.3 million before. The Chinese people are looking for a better life in Hong Kong as they want to get a job more easily. The people from China do many things the Hong Kong people don’t like, like sitting on the floor, spitting, talking loudly and never queueing.
“We view ourselves very differently to the Chinese. We have a very different culture. We don’t like their manner and attitude. We are China but we still have one country and two systems. This is very important. We have our own life, they have their own life.
“This time you come back it will be very exciting for you. You will find it is quite a big change in some parts.”

Mr Chow is right. These days there’s funky new neighbourhoods. Soho, Poho and Noho. Urban artists are claiming the streets as public space. Hong Kong’s favourite son Bruce Lee adorns one wall. I pause for a sweet sugar cane juice in an old Chinese shop house, which dates back to the 1940s. In Wan Chai, under the flyover, I visit a “villain hitter” who beats my bad luck away with an old shoe. They’ve been doing this here for five decades. One minute I dine in ancient dim sum halls, the next, in Michelin-star restaurants. I seek solace in temples and drink in edgy bars.

In two decades I had imagined there would be little of the old charm left. How wrong I was. The same heady Hong Kong is here. And it’s a little like me. The old structure which makes me unique remains. But there have been transformations. I’m no longer the naïve, young journalist from the Gold Coast who chase ambulances for a living. These days I’m seeking more substance from my existence and my writing. I’m trying to slow down but reap more from both work and life. It’s that constant paradox and similar to how I view Hong Kong. And inside every city, and every human, perhaps that’s the key. We are all a little east and west, yin and yang, dark and light. Given how difficult it is to understand our changing selves, how could we possibly know anyone else, or any one place? Twenty years on and I’m slowly figuring it out, this life business. Embracing the impermanence that a colourful city like Hong Kong, and a constant thirst for life, can teach a willing student like me.
The writer travelled as a guest of the Hong Kong Tourism Board – http://www.discoverhongkong.com.au and Cathay Pacific – http://www.cathaypacific.com.au

2 thoughts on “Honkers is still Bonkers”