IN my four-poster bed, replete with white chiffon curtains, I imagine I am an Indonesian High Priestess. Even my private spa, in which I will later take a skinny dip under the night sky, seems to gurgle its approval of the latest predicament in which I find myself. I have arrived at the Banyan Tree Bintan Island in my usual disheveled state, the effects of some aeroplane turbulence as we crossed the Equator, a reasonable swell on the ferry as we sailed across the South China Sea, several prescription drugs and red wine to fuel my travels, all beginning to wear off. But I remain chipper, for tonight I will sleep under this thatched Indonesian roof, or “alang alang”, in my seaside villa. 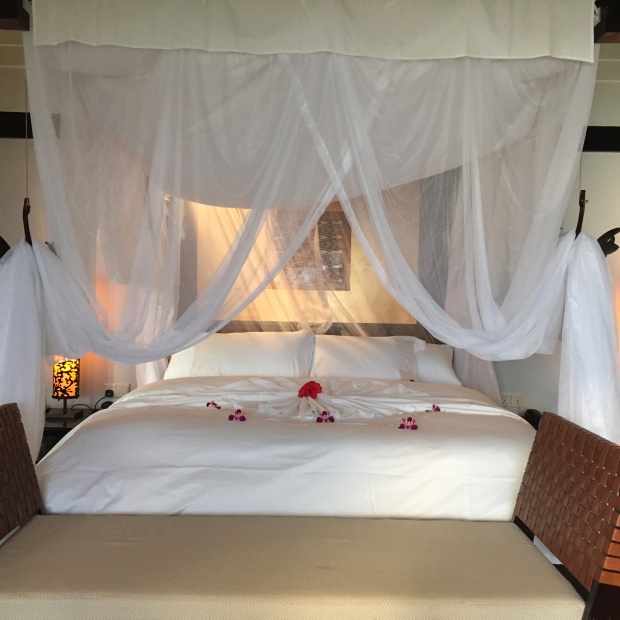 Yes, I can be quite the wanker, and never more so than when someone has handed me chunky keys to thick, timber doors of my very own villa, and informs me this is my home for the next few nights. Bintan Island is only a 45-minute ferry ride from Singapore where regular readers know I lived, rather unhappily, some three years ago. If only I’d known of this destination’s fabulous existence, I would have jumped on that boat and never returned to Singaling. Yes, I would have been last spotted swanning around this Indonesian island, potentially joining the local fishermen in their bright blue boats below, in a bid to carve out an existence. The fact I am staying in the luxury Banyan Tree only serves to make this story all the more exotic. Even the traditional monsoon seems to be behaving, blowing cooling south-easterly kisses in my direction.

I’m on a one-week expedition discovering both the Banyan Tree Bintan Island, and Banyan Tree Lang Co in Vietnam. Christopher Columbus I am not. By “expedition” and “discovering” I actually mean partaking in several long, lusty feasts on both properties, punctuated by the odd cooking class and spa treatment. It’s in the Banyan Tree spa on Bintan Island that I meet my therapist, Oza (pronounced Oh-Zah) who instructs me to get buck naked (“not even my undies?”, I mime, rather inelegantly to my Indonesian hostess) before we undertake the “Serenity” massage. Oza smothers me in peppermint oil and for the next hour I feel like I am Charlie Brown’s Peppermint Patty. My friend Amanda is in the next spa villa, and I wonder what treatment, and more important what Charlie Brown character, she smells like. So enthusiastic is Oza about her job, she crams the modesty sheet between my bare butt cheeks, before massaging them with gusto. It’s only after the massage that Amanda informs me she was instructed to keep her underwear on, and there were no sheet wedgies in her villa.

Later that night I return to my villa and discover my towels have been fashioned into two swans in the shape of a love heart and flower petals have been scattered on my sheets. For a brief moment I think Oza may have mis-read the intent of my lack of underpants during the massage, until Amanda posts a photo of her neighbouring villa, with identical set up. We both lament the fact we will be staring at those swans, alone, while conceding the Indonesians must be among the most optimistic on the planet to leave such a letter of love for the two of us, who are not, exactly, what you’d call lucky in love.

Onwards and upwards we travel to Vietnam, where we have a date with the Banyan Tree in Lang Co, a beachside destination some two hours from Danang. Those sexy swans seem to follow me wherever I go in Asia, and I arrive back to my latest villa one night to find not only those birds have been folded and tucked into a corner of my bathroom, but someone has drawn me a bath, complete with rose petals. Could it be Windy, my Vietnamese masseur, who earlier that day allowed me to wear some XL disposal underpants which I may or may not have torn trying to get over my thighs? Windy insisted on massaging my breasts despite the fact that Amanda was in the next room, having the very same massage, yet no one touched hers. I am beginning to think my sex appeal among Asian women knows no bounds, when I discover the bath is actually part of the hotel’s turndown service known as “Intimate Moments”.

It’s only when I’m partaking in a cooking class in the Banyan Tree Lang Co’s Organic Garden that I’m reminded of home. For here are a bunch of herbs, whose descriptions run along the lines of: “Piper Sarmentosum is an erect herb with long, creeping stems” and “Chillies are usually skinny and wrinkled. These chillies usually measure 6 inches long and 1 inch wide.” If ever there was something designed to make me think fondly of the boys of Brisbane, it has to be this herb garden.

But I have no time for such folly, as we are spending the afternoon shopping in the World Heritage city of Hoi An. Amid the chaos of cycles, coconuts, tinkers and tailors, I tend to fall apart. While the girls shop in a feverish manner, I take reprieve under a fan in a corner café and sip a cold bottle of the local Biere Larue. It’s the kind of place I figure the man of my dreams may frequent. He’ll be a fellow traveller, perhaps even a literary type, and I like to think I look exotic and mysterious sitting alone in this Vietnamese café. He’ll glance at me and forget my hair is fuzzing from the humidity or that I wear a moustache of sweat, and think I’m simply lovely, I imagine.

Incredibly, this doesn’t happen, and instead I wander further down the street where I stumble upon our Vietnamese friend Kiet, who has accompanied us on our shopping trip. Kiet is sitting on the sidewalk of his favourite café, Cargo, partaking in one of life’s great pleasures, drinking beer and people watching, and as I join him we linger for a long while, discussing life and love and ponder world issues. Eventually, the tourists disappear, the lights fade and the air starts to cool. And I realise there is absolutely nowhere I’d rather be on the entire planet than at this destination, at this exact moment in time.

The Global Goddess travelled as a guest of Banyan Tree – http://www.banyantree.com and Scoot Airlines – http://www.flyscoot.com

11 thoughts on “Sex under the Banyan Tree”

Leave a Reply to The Global Goddess Cancel reply