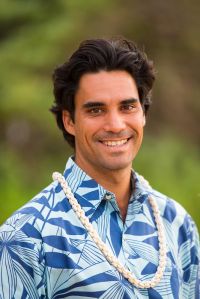 A HOT Hawaiian, a pasty American tourist and two Australian girls walk into a spa… No, this is not the start of a joke, but an incident which occurred on my recent trip to Hawaii. And by spa I actually mean hot tub, and that’s not the only part of this story that needs clarifying. Regular readers of this blog will know that I have spent the best part of this year looking for love in all the wrong places, including most recently little red men on Hawaii’s Big Island, so it should come as no surprise that the events about which I am to write unfolded as they did.

It’s a sultry Sunday in Maui and I’ve spent the morning learning to stand-up paddleboard in what is a considerable swell. Much to the amusement of onlookers I get to my knees, crouch, see the next wave, and jump back to my belly. Kelly Slater I am not, and just as I’m about to quit my stand-up paddleboard career before it’s even started, I feel a rush of determination and leap to my feet, knees bent, eyes on the horizon, and I paddle. I actually paddle. All of this unexpected activity has taken its toll by mid-afternoon however, and I meet a mate by the pool where our endearing Australian twangs have caught the ear of a hot, hairy Hawaiian I had seen earlier, reading a book. Let me repeat this: there was a man, reading a book.

The hot Hawaiian, as it turns out, is to be our guide for the next day and introduces himself as Kainoa Horcajo, a cultural specialist and potentially the best-looking man in the entire 50th state, if not the United States itself (apart from Obama). Because Australians are such friendly girls, we invite Kainoa to jump into the spa, where we also bump into a pasty American tourist, who immediately shakes our hand. In. The. Spa. In terms of bizarre spa behaviour, this takes the cake, but we humour the pasty tourist while staring longingly at Kainoa. Even his name sounds like a melody and I imagine what it would be like to strum his ukulele.

We’re staying at Travaasa Hana, a remote resort on the other side of Maui in the tiny township of Hana, which reminds me of old Hawaii depicted in a 1970s post card. And I am smitten. With Hana, with the ranch-style house overlooking the ocean in which I am staying, and with Kainoa who turns up to dinner that night, curiously with the pasty American tourist. “Are you joining us for dinner?” I ask the tourist, not surprised that the Hawaiian hospitality would extend to this lone wolf. “Yes,” he replies looking at me oddly.

In terms of business dinners, this is one of the best all year, with sous chef Konrad Arroyo serving up such delights as Lomi Salmon, Maui Cattle Co. Striploin Tataki, Ginger Steamed Mahi Mahi, and Lilikoi Crème Brulee. After we’ve consumed several cold beverages, and I’ve spent considerable hours gazing lovingly at Kainoa’s beard, one of my friends turns to the American tourist, who happens to be seated at the head of the table. “And so what do you do?” she asks. “I’m the President of this resort,” he replies to our immediate embarrassment, before paying the bill, and we all burst out laughing. Luckily, Adam Hawthorne, President of Travaasa Experiential Resorts, is as good humoured as the Hawaiians and this is not yet another country in which I have to leave under the cloak of darkness.

We all walk back to our ranch houses, and Kainoa tells me his is on the other side of mine, thus ensuring I don’t fetch a minute of sleep that night, as I imagine him strumming his ukulele. But the show must go on, and the next day Kainoa takes us to Kahanu Garden where we meet elder Pi’iLani Lua, a proud Hawaiian woman who hails from a long hula line.
“In the old days being women we would not take the best looking man. We were smarter than that. We needed someone who could work with rock and rope. If a man had no hair on his knees, we knew he was good at that.
“The men did all the cooking. “
I cast a furtive glance at Kainoa’s hairy knees but am pretty sure if he had to, he could be handy with a rock and some rope. 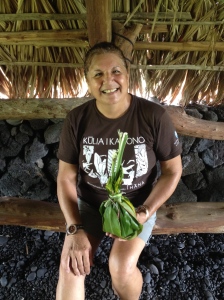 We continue on our journey around the island.
“You can see waterfalls everywhere we go. The sense of community out here is awesome. It makes you feel good about humanity,” Kainoa says.
“A lot of people here still survive on subsistence living so they fish or hunt for their survival. The Hawaiians don’t believe so much in bartering but free trade. We view it more as you give what you have, there is reciprocity to it. As in, I have the ability to you this, please take it freely.
“This land is a great teacher in how to survive. It’s a traditional insurance policy. Hawaii has this way of letting you know whether you should be here or not.”

It’s Monday when we end our journey in Maui. Kainoa speaks about the importance of the moon in Hawaiian culture and the fact that it’s been four days since a full moon. In the local vernacular that makes it La’au Pau – a “time of creation, planting and sex,” Kainoa says.
“Hawaiians talk about sex a lot.”
I can’t be certain, but I’m pretty sure I’ve found my people. 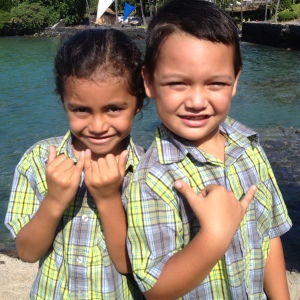 The Global Goddess travelled as a guest of Hawaii Tourism. To book your own escape go to http://www.gohawaii.com/au; stay on Maui at Travaasa Hana http://www.travaasa.com/hana/#ATwQIpsaoFQTgwtS.97 or Andaz Maui http://maui.andaz.hyatt.com/en/hotel/home.html