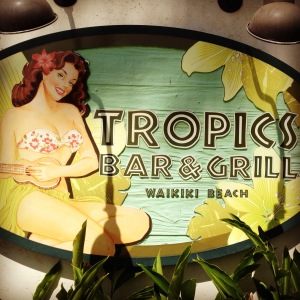 I’M running late for a date with Passion. I arrive in Hawaii early morning after an overnight night flight from Brisbane, clutching all the usual clichés: a suitcase, welcome lei, and the remnants of the previous evening’s airline meal attached to my dress. My travelling companion dives straight into Oahu, literally, and is off for a learn-to-surf lesson. Me, I prefer to let Hawaii wash gently over my jetlagged self, and wander down to Waikiki for a cold beer, a meal of mahi mahi and a feast of people watching. Sated, I sleep like the dead in readiness for my full island tour the next day, and my much-anticipated date with Passion.

It’s been 22 years since I’ve been to Hawaii, and my only memory is of Waikiki and the fact my ex-husband punctured the li-lo on which I intended to laze in its warm waters on a tree before we even got to the beach. So I’m desperate to see what’s around the next corner. I join a tour which will spend all day weaving from Waikiki through a snapshot of suburbia, to sugar cane fields, past beaches, through valleys, onto ancient Hawaiian grounds and around waterfalls. 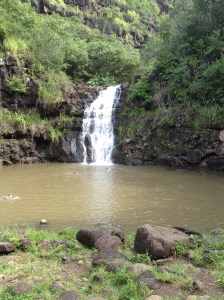 Incredibly, every tour on which I’ve ever been anywhere in the world serves up the same cluster of characters. The gregarious gay couple; the comfortably chubby married pair; the Russians in their Cold War swim wear range; the loud Americans and softly-spoken Canadians; the Bintang bogan with his attractive Asian wife in grossly inappropriate high heels; and the single Australian woman…who happens to be me.

While I self-indulgently imagine the rest of the tour tries to unravel my mystery – I do like to apply a Mona Lisa smile along with my sunscreen – I watch Oahu unfurl before me and secretly count down the hours until I can meet Passion. At this stage I should reveal I don’t know whether Passion is a man, a woman or a concept. In the meantime Maurice, our tour guide who grew up in Hawaii in the late 60s, shares Oahu’s secrets. We pass the Baskin Robbins ice-cream shop where Barack Obama worked his first job and learn that Elizabeth Taylor once lived over near the North Shore. There’s also a smorgasbord of film and television locations, including the house from the opening scene of Fantasy Island where the pint-sized Tattoo famously shouts “The plane, the plane!” as well as the giant green hills of the mythical Jurassic Park.

But what piques my interest most is the tale of a particular house, high on the hills, one that Elvis Presley wanted to buy. Despite repeated and insanely high offers, the owner refused to sell to the King of Rock, instead inviting Elvis to holiday there whenever he wanted. Elvis took him up on the offer and the pair became firm friends. I spend the rest of the tour fantasising about Elvis turning up on the doorstep of my quaint tin and timber Queenslander cottage back home in Brisbane, which is similar to a Hawaiian beach shack, and daydreaming about that hunka hunka burning love. And several other nice Hawaiian boys I find along the way. Yes, while the rest of the tour is on the beach collecting shells, I’m starting my own collection… 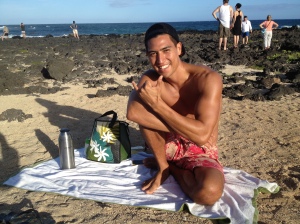 I’m snapped out of my lustful thoughts when I arrive back at the hotel, late for my date with Passion. I rapidly shower, and rush downstairs to the bar where I learn that Passion is yet to arrive, the irony of which is not lost on me as I drink a Longboard Lager. It’s not till dinner is almost finished that I finally meet Passion, a beautiful woman who rushes up to our table and enthusiastically orders dessert while chatting with gusto about her day. It turns out Passion is the Marketing and Communications Manager of The Modern Honolulu in which I am staying and says her grandmother picked her name from an old Troy Donahue movie. “It wasn’t the easiest name growing up, but I grew into it,” she laughs.

And it gets even better. Just before we depart, we also meet another staffer, Patience, who also carries all the characteristics of her lovely moniker. At this stage I ask Passion whether she will bestow on me a Hawaiian name, one which will carry me through the rest of my journey through this incredible land. She knows nothing about me, apart from the fact I’m an Australian journalist, but looks at me knowingly, and says: “My intuition tells me that you are Healani, which means heavenly haze.” I laugh out loud. Yes, The Global Goddess has well and truly arrived in Hawaii. And Elvis is definitely not dead.

The Global Goddess travelled as a guest of Hawaii Tourism. To book your own escape go to http://www.gohawaii.com/au; stay at The Modern Honolulu http://www.themodernhonolulu; and to see more of Oahu take a Discover Hawaii Tour http://www.discoverhawaiitours.com

6 thoughts on “Finding Passion in Hawaii”