TRUE to form I spy the tea and coffee on offer, panic, and sidle up to what I believe is a member of the wait staff and discreetly enquire whether they could rustle me up a champagne. It’s 3pm on a Wednesday afternoon and I’m at a High Tea, but I’m bamboozled by the lack of bubbles, the thought of which has kept me going on the one-hour drive from Brisbane to the Gold Coast. What I don’t realise until a little later is the waitress is actually a senior member of the hotel executive team who has invited me to this event and I’ve just made a complete boob of myself.

Thankfully boobs are in vogue this particular afternoon, as the High Tea is being staged to launch the cookbook Cook 4 a Cure to raise funds for the National Breast Cancer Foundation, and to celebrate the opening of Australia’s newest resort brand ULTIQA Resorts. I’m at the five-star beachfront ULTIQA Air on Broadbeach listening to Australia’s highest-selling cookbook author Kym McCosker speak about her latest tome, the 18th in her “4 ingredients” cookbook series. So successful is Kym, she’s outsold Jamie Oliver 3:1 with more than nine million cookbooks now retailing in 30 countries. Her first book catapulted her to the highest-selling self-published author in Australian history, clocking up three million sales. Which is not bad from a girl from the tiny Queensland town of Mundubberra. 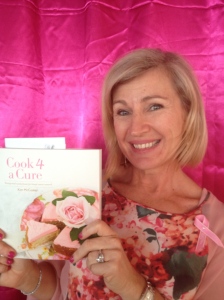 It’s a perfect Pacific Ocean aqua afternoon outside, replete with migrating humpback whales languidly slapping their tails out on the horizon, but inside it’s all passion and pink satin. Cook 4 a Cure, which is sold exclusively through Big W stores, aims to raise $100,000 for breast cancer research to assist the National Breast Cancer Foundation’s goal of zero deaths from this insidious disease by 2030.

Throughout the afternoon, dining on such delicious rosewater tea and Kym’s home-made cakes and biscuits that I actually forget I’m not drinking any champagne, I have an overwhelming desire to check my breasts, which is exactly what guest speaker Mark Wood urges us to do. (Normally it’s AFTER I drink champagne that I am overcome by the urge to commit inappropriate acts in public). Mark, regarded as the “Mr Pink” of the Australian speaking circuit, volunteers his time to speak about breast cancer after losing his wife Annie to the disease seven years ago, and says one in eight Australian women will be told they have breast cancer at some stage.
“Today, 37 women will be told they have breast cancer. To think that’s happening to 37 people today and the day after is far too many. And seven people would have lost that battle today,” he says.
“My wife got a death sentence but my daughter, who was 12 at the time that Annie died, got a life sentence losing her mother so young.
“Twenty years ago, 37 per cent of women diagnosed with the disease died, but that’s now been halved through awareness and education.”
At this point, I wish I did have some champagne, as then I could blame the demon drink on becoming all tired and emotional, but as I furtively glance around the room, I find I am not alone. There’s not a dry eye in the house.

The National Breast Cancer Foundation has raised $105 million in the past twenty years towards 370 research projects which don’t just target breast cancer but other forms of the disease. And, in exciting news, Mark says researchers are working on nano-technology which will be able to tell from a simple breath test whether any cancer is present in your cells.
“People often think breast cancer runs in the family but the statistics don’t support that. Of all new cases, 90 per cent have no family history. So please don’t think because you haven’t got it in your family you won’t be affected,” he says.

It’s a fitting message delivered in a fitting setting, as ULTIQA is a Queensland family-owned property group owned by the Henry’s who not only donated the function room and their time free-of-charge, but during the afternoon, contribute $5000 from their personal pocket to add to what will be raised by Kym’s events and book sales to breast cancer. Mark Henry, the resort group’s Managing Director, says the name ULTIQA stands for ultra modern boutique apartments. There’s currently four in the ULTIQA stable including Air on Broadbeach and Freshwater Point Resort, also at Broadbeach on the Gold Coast; Rothbury Hotel in Brisbane; and Shearwater Resort on the Sunshine Coast.

I spend two nights experiencing the two Broadbeach-based properties, which echo with the heart and hard work of the Henry family. In between, I check out my boobs. And it seems I am not alone. On my second morning as I walk along the beachfront, I’m accosted by a 14-year –old-school boy, who offers to slather me in sunscreen, before scurrying off and sniggering with his mates. I should be offended by this future misogynist-in-the making but I simply smile to myself. This is clearly an indication that I’ve still got it. Yes, some days, all the breast things happen. 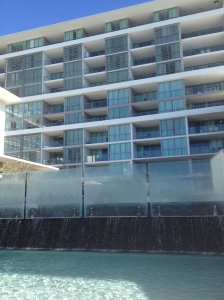 5 thoughts on “Boobs and Broadbeach”