IT’S an auspicious start. A few days before it all begins, I receive an email with a “warning” that the performance I am about to experience contains “extreme coarse language, sexual references, loud music and sound effects, herbal cigarettes and smoke effects, and strobe lighting.” I feel like the corrupt version of Maria Von Trapp and for a second feel like bursting into a rendition of These Are a Few of My Favourite Things. On Friday night, I went to Brisbane’s Bille Brown Studio for the opening night of I Want To Know What Love Is. (By the way, this subject was the most Googled above all else, during 2012). No prizes for guessing what attracted me to this particular performance (apart from all the contraband mentioned above). It’s part of the Brisbane Festival https://theglobalgoddess.com/2014/08/25/one-hearty-party/ and regular readers will know that I really, really want to know what love is, and not just during a 60-minute theatre performance. Yes, Sister Maria, rainbows and kittens aside, how do I solve this particular problem?

I’m hoping this production can give me some juicy tips and so I grab a mate and a glass of wine and enter The Greenhouse where it is showing with an open mind. Before the play begins, let me set the scene. The rest of the audience has filed in, and is happily sitting check-to-jowl while my mate and me sit all alone in a row, three accusingly empty chairs either side of us, like we’re wearing Ebola outbreak t-shirts. Now, this is not particularly unusual for either of us on a Friday night, my mate correctly describes herself as the woman most likely to attract the bloke in the bar about to publicly pee himself. I didn’t believe this at first, but I’ve now witnessed this special gift several hundred times and it’s insanely true. I, on the other hand, always attract the meanest man in any social setting, who hunts me down like a killer shark, and then tears me apart, limb by miserable limb.

But persevere we do and we laugh with silky irony when this show opens with the reminder to “switch off your phones because if they haven’t called you by now, they’re not going to.” For the next 60 minutes we’re taken on that rickety roller coaster that is love. This show was cleverly crafted after a specially-built website called http://www.wewantyourlove.com was launched on Valentine’s Day this year and invited the public to respond to a series of questions about love. More than 800 people responded, of which 85 per cent spoke about romantic love and of these, about 40 per cent told of their heartbreak. Director Daniel Evans, who built the show around these submissions, describes the responses as “giddy love letters, steamy poetry, crush confessions and dark, painful admissions”. 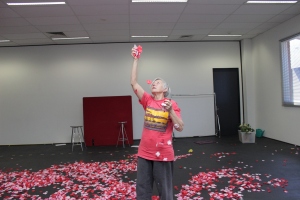 And this hour-long show is one of amorous anarchy where you learn of all kinds of love from that of dads and dogs to the more traditional kind. At times, like love itself, I don’t know whether to laugh or cry, so I clutch my wine and do both. Yes, this is a story of sex, seduction and sadness (plus copious rose petals) and afterwards you’ll really feel like a post-production cigarette, even if you’re a non-smoker like me. Yes, it’s colourful and complicated, at times well choreographed and at others, just plain confusing, just like love.

Curiously, of the 812 people who filled out of the survey, only 9 chose to leave their name. But 322 elected to name of the person they loved instead. I still have no idea what love is, but I’m pretty sure it’s alive, just like those bloody hills Maria Von Trapp keeps banging on about.

The Global Goddess was a guest of the Queensland Theatre Company. I Want To Know What Love Is runs until September 13, 2014. To book this, or other Brisbane Festival performances, please go to http://www.brisbanefestival.com.au Oh, and if you do find out what love is, be sure to drop me a line… 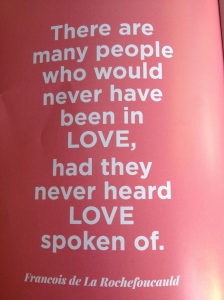