I HAVE long suspected that I am a gay man trapped in a straight woman’s body. What I have never imagined is that I am a world-class gymnast. And so last night when I found myself at Glasgow’s Hydro Stadium, purpose-built for this year’s Commonwealth Games gymnastic events, it was not a half pike with a double twist which drew me there, but Brookyln crooner Barry Manilow. Yes, Baz was in town and faster than you can say Copacabana, I was there, canastas and all. (For the record if you need any more evidence I am actually a gay man – apart from the gaggle of gay men and utterly fantastic females who seem to be drawn to me and the fact most straight blokes find me utterly repulsive – I actually selected Copacabana for my “wedding waltz” ten years ago. Which probably proves that at least one, and potentially both of us in that now-defunct union, were actually gay men).

But I digress. Let me start by saying The Hydro, which was opened last August by Rod Stewart (who is definitely not gay if the parade of blondes he’s had on his arms over the years is any indication), was originally called the Scottish Hydro Arena Glasgow but when Glaswegians shortened that, the acronym spelt SHAG and even the sassy Scots baulked at that. But for the purpose of this tale let’s just say I “shagged” Barry Manilow last night and he was simply superb – suspected botox and all. 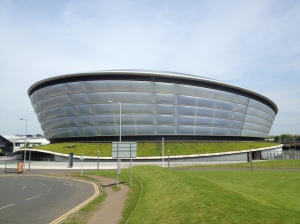 Don’t get me wrong, the Scots are sassy and sexy, all soupy accents as thick as a glorious Glaswegian winter itself. And there’s plenty of evidence of their cheeky good humour spattered around this pretty city. At Glasgow’s Cathedral, there’s a stained-glass window depicting Adam and Eve before they committed the dreaded sin of eating the apples, and as such they are without their fig leaves. Tennents Brewery is one of the oldest in the world, dating back to 1556, with one of its most famous customers Mary Queen of Scots.Nearby, St Andrews is no longer a church but a place of worship for Scottish culture…namely drinking and eating locally-sourced produce. In the Botanic Gardens you’ll find Kibble House with its nude statues, again depicting the likes of Eve. For a real taste of Scottish sass, head to the old church Oran Mor at which you can partake in a lovely lunchtime ritual of a Play, a Pie and a Pint.

And then there’s Barry. The giant stage curtains were emblazoned with a giant red love heart and about 10,000 green lights flickered in the audience like glow worms. Then, to the tunes of “It’s A Miracle”, Barry partly bounced (and partly hobbled) on to stage in a blue sequined jacket. Yes, Barry, it’s a miracle… that you’re still alive. (He’s now 70). He then played “Here I Am” describing it as an “oldie, but a goodie, just like me”. And just like your audience, Barry. I don’t want to cast any aspersions but let’s just say, if you want to feel young and sexy, get along to a Barry Manilow concert sometime soon.

At one point during his performance, Barry jumped on to the piano but despite his lean physique it’s pretty clear he won’t be back for the gymnastics in a few months time. (Nor, shall I add, will I, having been given the grand total of 0.5 out of 5 for at least attempting a cartwheel in Grade 8 before I retired from my gymnastics career). During his second clothing change (he’s no Lady Gaga), he flashed open the trench coat he was wearing to reveal a red suit jacket before he threatened to “whip it out”. Thankfully by “it” he meant the musical instrument, whose name eludes me (I will also never be a musician).

To accompany his dad jokes there was also plenty of dad dancing, and he captivated the mostly greying audience with his rendition of Mandy, leaving many of them wondering who the lucky girl was. Some (myself included) even attempted to dance to Copacabana, there were plenty of wolf whistles from some concert goers who may or may not have lost their teeth in the process, and every time I turned around in the crowd a grandmotherly type kept winking at me, making me wonder whether I reminded her of her gay grandson. 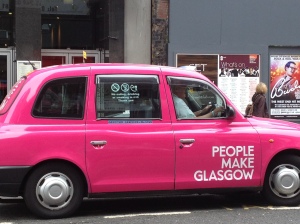 At some point during the performance Barry sang a song about the Brooklyn building in which he grew up, The Mayflower. He spoke of how he used to look up at the windows and wonder who was living next door. “You never know, you could have a doctor, a lawyer or a sex God living next to you.” I pondered his words as I drifted to sleep back in Room 415 at Glasgow’s Hotel Indigo last night after the concert. What if he was in the room next door? One thing is for certain: Glasgow, you were an absolute delight. And Barry, I just can’t smile without you.

The Global Goddess travelled to Glasgow as a guest of the Glasgow City Marketing Bureau. For further information on visiting Glasgow please visit http://www.peoplemakeglasgow.com.au

7 thoughts on “I Can’t Smile Without You”