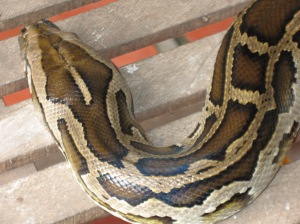 I ARRIVED late, in the midst of a ferocious tropical storm. I was the only person on the bus which was carrying me deeper into the jungle. My friendly Malaysian driver dropped me off in the dark, the torrential rain soaking me to the skin, with the warning: “watch out for snakes, as they are always watching you.” Great, I thought, he could have said “men” instead of “snakes” but it was not to be on this particular evening.

I took my first tentative steps towards the dim light somewhere in the distance…and promptly broke my sandals. Now I was drenched, barefoot, and in the midst of a potential snake pit in a tropical thunderstorm in the dark and rather alone. 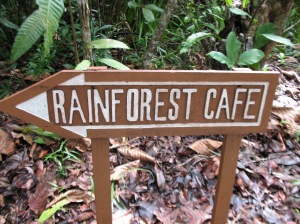 Sliding on the slippery path, I eventually made my way to the light which turned out to be a cafe where I grabbed a beer, and sat out the storm. Upon leaving, I saw what looked like a lovely little green tree snake. “Don’t move,” one of the Malaysian cafe owners called out. “It’s a deadly viper, and it can kill you in seconds.”

I was reminded today of my trip to Kuching last November when I found the first evidence of Spring on my back deck. A snake skin. Now, I have a bit of an Indiana Jones relationship with snakes. They scare me, and always have. It goes right back to when we were kids in country Queensland and come summer, our backyard was full of poisonous king browns. My parents, being tough-love 1970s types, offered us little comfort: “If you see a snake, you freeze like a statute and you call out ‘mum’ and then you keep watching it so we know where it’s gone.” And then dad, who is a bit of a Steve Irwin, would march up to the deadly serpent, grab it, bag it and dump it on the farm to eat the rats. Lizards, on the other hand, I love. They’ve got legs. 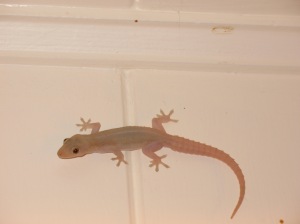 So, it came as quite a shock one night a few years back when I was having a barbecue on my beloved back deck to feel all the hackles on my neck rise, in that really creepy fashion jsut before something bad’s about to happen. I turned around and there she was, slithering down the railings. I decided it was time to conquer my fear and named my snake Anastascia, deciding she was my sex goddess, meaning whenever she made an appearance, things would improve in my bedroom, so to speak. And, miraculously they did.

I won’t go into details but suffice to say, we both had a wonderful summer. For the record, I’m not alone in my thinking. Just this week, a Townsville couple went to the media with their story about two pythons copulating in their ceiling. According to Ron Degenhart: “You and your missus could be going hammer and tongs in the bedroom, while the snakes are going at it upstairs as well.” 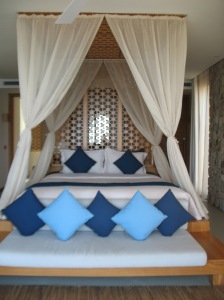 Yes, things were going great guns for me, until the night Anastascia died. It was a scorching February night and I was laying in bed, clad only in undies and a singlet, drinking wine (yes, I know how to party).  I heard what I thought were two possums fighting right outside my bedroom window. And then “boom!”, my neighbour Dave – a bit of a bogan – burst through my front gates and leapt down in front on my bedroom windows, grabbing a massive python which was in the process of eating his cat. I stood there, a little tipsy if I have to admit it, in my undies and singlet, glass of wine still firmly in hand, watching in slow-motion as Dave wrestled the cat from the snake’s mouth. It was Anastascia having dinner. Dave screamed “it bit me, it bit me”, the cat went flying into the night, and Dave stood before me, snake dangling from his hands. For the record the cat, not the snake, had bitten Dave.

The only words I could mutter were “you’re not leaving that snake here” and thus, Anastascia met an untimely death. (Which, for the record, is a great shame as Anastascia was the Indigenous species in this scenario, not the cat, but circumstances had already spiralled beyond my control).

Around the same time, my summer of sex abruptly stopped. So, it was with pure delight that I found my new snake skin this week. I’ve called her Sylvia. I haven’t see her yet, and Dave and his cat have since moved on. But I’m certainly looking forward to a long, hot, summer. 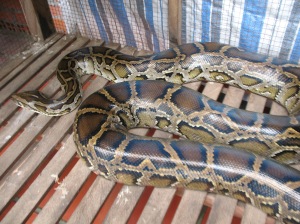 4 thoughts on “The sex goddess returns”