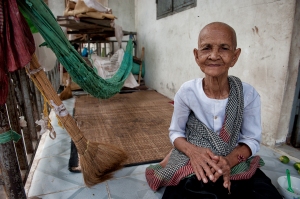 LONG after the humidity, dust and noise have reluctantly retired for the night – or at least taken a brief reprieve – it’s the stench of poverty in Cambodia that remains etched beneath your skin. Beneath the chorus of whirring fans and clucking geckos, images of the limbless, the orphaned and the blind coil, like an endless movie reel, around the mind.
Somewhere around the bewitching hour – about 3am when the mosquitoes chopper in – arrives the rude realisation that almost the entire Cambodian population is under the age of 30…a deep and brutal scar of the Khmer Rouge regime. And most of its people are dirt poor.

I penned these words several years ago, after my first trip to Cambodia and Siem Reap and after I had visited the Sunrise Children’s Village where beautiful orphaned children had been taken under the wing of big-hearted, flame-haired Australian Geraldine Cox. One little girl was suffering from foetal alcohol syndrome. A little boy in the orphanage had seen his father killed by a land mine, and was too frightened to even step on the ground, so had to be carried everywhere. Other little girls and boys had been sold by their starving families across the border into Thailand’s sex trade.

About a year later Cox was in Brisbane addressing a business women’s lunch, when she described one of the most horrific images I will never forget. She talked about how she was in the Siem Reap markets and there was a baby orphan boy, who kind of belonged to everyone and at the same time, no one. Cox looked into his big bright eyes and told him that when she returned from her latest trip to Australia, she would take him into the orphanage. She did return and what she found sickened her to the core. Someone had cut out the baby boy’s eyes and sold them on the black market. I defy anyone who travels to a place like Cambodia not to be moved by its story. Australian photographer Danielle Lancaster, who owns Blue Dog Photography, is another person touched by Cambodia’s soul. 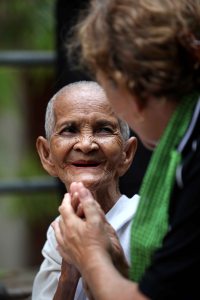 Lancaster first started travelling to Cambodia about seven years ago prompted by an interest in history, Buddhism and a bewilderment at how someone like Pol Pot could kill his own people.
“How can someone walk one million of his own people out of a city in one night and horrifically torture them? Nearly every monk was killed and there were about 4000 doctors at the start of the Pol Pot regime, and only 4 left at the end,” she says.
“Friends of mine had worked as war photographers there and I started to go back every year. I met a tuk tuk driver who was a young fellow who took me to his village and I got to meet his family. We became good friends and I met more Cambodian people but at that stage you hardly saw a girl in secondary school because selling girls into prostitution was so big.
“I met a lady whose daughter was working in hospitality and she was paid $2 for her. Yes, her daughter was working in hospitality but she was not serving tables. I started to look at the high school and said ‘where are the girls?’.”

So struck was Lancaster by this beautiful country and its story she started buying basic goods such as underwear and books for the children and talking to the community about the importance of educating its children. Lancaster, who also privately sponsors two girls and works with a local orphanage, gained sponsorship in 2011 to produce a calendar, the sales of which meant they could build two new class rooms and desks with a white board. In 2012 Blue Dog Communities was formed.

“Last year I was just like ‘bring it’ and we had the school full of girls. They clasp the chalk like it’s gold. Last year I realised this is working, we are getting the girls into school and they are staying at school,” Lancaster says.
“From the sales of our 2012 calendar we are replacing the palm frond class rooms with cement so the kids don’t have to sit there with mud on their feet. It is a big project but our foundations are down.
“The community needs to be able to see the business happening. This is a population that has had a lot of promises of aid, they’ve got no natural resources. It was so torn apart by Pol Pot and the arms’ trade during the Vietnam War and everybody just has forgotten about it.” 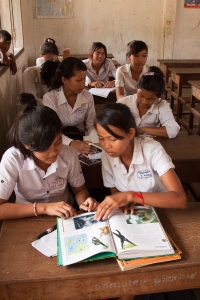 Along the way, this professional and passionate photographer will critique your work and assist you in getting the best photographs possible, such as those shown in this story. At the end of the week, not only will you have done something amazing for your fellow humans, but will have some terrific pictures of your journey. 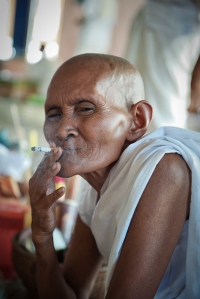 “When I go there I have this wonderful sense of calm that comes over me. It is just an extremely rewarding experience,” Lancaster says.
“In Cambodia, there is just something that got me in my heart and soul. I believe it is a life-changing experience.”

The next Blue Dog Photography & Cultural Workshop to Cambodia will be from June 30 to July 7. To book a tour or simply donate to their community work in Siem Reap, go to http://www.blue-dog.com.au