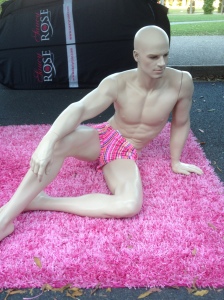 SOMEONE please pass the remote control, as I think I’ve hit Menopause. Now, before you all start marvelling at this medical miracle (I know what you’re thinking, how can someone so young and virile reach menopause?), I don’t mean the hot flushes, cranky pants condition. Heck, if that was the barometer, everyone in Brisbane this week would be suffering from the Change of Life. No, I mean the real deal. A protracted pause in men.

Now, you may be reading this and thinking, so what’s new? It’s not like she’s had any luck on the dating scene in recent centuries. But I mean, there are NO men on the radar. And by this I mean, not even the bad-spellers who think apostrophes are an incorrect ink stain on the page best avoided. Not even the desperate 70 year olds who have finally realised the futility of chasing 20 year olds and have upgraded their search to women in their 40s like me. There’s no one! 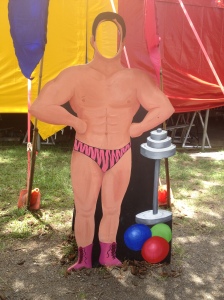 I’ve been trying to console myself with the fact it’s still early January and all those bad spellers are still out west pig shootin and guzzlin Bundy, but now I’m starting to wonder. How many pigs could there be? What if….insert dramatic pause…even the dudes who don’t know the difference between your and you’re or there and their, and may or may not have their front teeth, have finally decided I’m over the hill?

I’ve read all about the real Menopause and it truly fascinates me. Of  most interest, is how bad can it really be? And I refer to the other end of the female reproductive cycle, Menstruation. Now, I lived in utter terror of my first period, largely because I was sold all sorts of horror stories about this, including terrifying tales of being on the softball field one day and litres of blood suddenly gushing out of my body. My best friend at the time, Michelle, told me an equally horrifying fable of her sister having her first period, and at the dinner table that night, her mother announcing to the entire family that “Kathy is a woman now”. Oh. My. God. Dinner and a show. 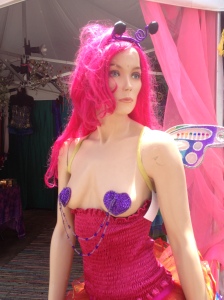 This fear was not helped by my mother whose own mother told her nothing about menstruation so that the day my mum got her first period, she believed she was bleeding to death. (If you think there’s a dramatic gene in my family, you are correct). Unfortunately, mum decided to correct this issue for future generations by taking us aside at the premature age of 7, handing us a booklet with butterflies on the front entitled “Now You’re A Woman” and at the end asking whether we had any questions. Questions?! Good, God woman. I had no idea what these butterflies were up to!

So we left the kitchen table none the wiser. For several years I actually thought Menstruation just meant frustration with men. Until the big day finally arrived. There was no triage scene on the softball field. It was all a bit of an anticlimax really. Although that didn’t stop me circling the Hill’s Hoist five or six times while mum was hanging the washing, nervously trying to find a way to break the news to her. I chickened out, and waited till she was in the kitchen doing something horrible with mince (mum does horrible things with mince) to break the news. “Oh, that’s lovely,” she gushed, as if I’d told her we’d just won the lotto. Frankly, I stood there thinking she was over-reacting a bit as usual. And then there was the issue of dinner that night. At what point would she make the big announcement to the rest of the family? Thankfully, this was just another myth, and I escaped with just having to eat some horrible mince dish.

But I digress. Sometime in the future I will have to face the issue of Menopause. Do you still call your mum? Gather some girlfriends and announce it over dinner? Play softball? I have no idea. And how will I know the difference between Climate Change and the Change of Life? 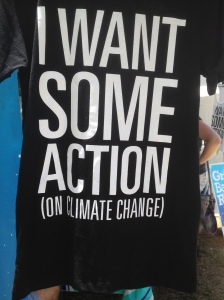 In the meantime, while I’ve still got a few good years left in me, I half wish those bad spellin pig shooters would come back into town from out west. Or are the barra biting somewhere? Surely, if I overlook the occasional dangling participle or stop caring about the difference between where, were and we’re, I can find some common ground? 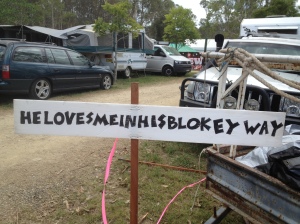 Then again, maybe I should just hang out till February, when it gets even hotter and the young university boys truck into town. At least they can spell. 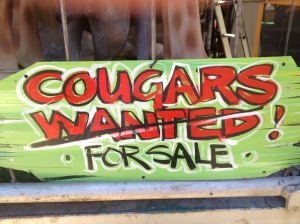